It would seem as if Brexit has left the business news for a while, as the both sides of the house continue with their negotiations.

In the meantime, despite the PMs best efforts, the UK will now have to enter into European elections on 23 May.  But the economic statistics have been released and there are varying analysis of the results and forecasts.

The Office for National Statistics give their quarterly summary as

Details of the ONS report can be viewed here 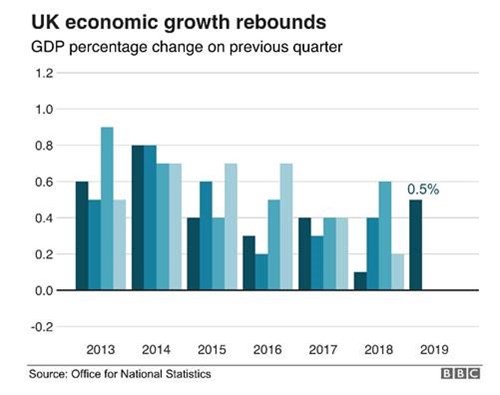 The BBC’s economic correspondent suggests : “Take the first three months of this year, when the economy grew by 0.5%, according to the latest official figures.  At the time, many companies were busy stockpiling components and finished goods due to fears of a no-deal Brexit.

“That makes growth look stronger, but that buzz of activity reflects contingency planning rather than a response to strong demand.

“And it may mean less of that activity further down the line, making growth look weaker in subsequent quarters."

Responding to the latest official GDP statistics for the UK, Tej Parikh, Senior Economist at the Institute of Directors  , said, “The relatively strong growth figures for Q1 may just be a flash in the pan.  Some businesses brought activity forward early this year in preparation for leaving the EU, so higher stocks and earlier orders have artificially bumped up the growth numbers.”

Whilst the National Institute of Economic and Social Research (NIESR) said tax income would fall by £13bn a year. “A Brexit involving staying in the customs union would leave the UK £80bn worse off a year than if it had remained in the EU”, a report says.  The research was commissioned by the People's Vote campaign for a further EU referendum.

Women in Technology: why diversity matters