The North West is leading action to tackle climate change and power a Green Industrial Revolution … that’s the message from the North West’s political and business leaders as they prepare to stage their official COP26 programme.

Leaders from across the North West – home to 7.3 million people - are uniting for COP26. They’re sending a clear message to international leaders that, with the right investment, the region can become the first in the UK to reach net zero. Doing so would create thousands of green jobs, improve air quality and stimulate billions of investment into communities.

As part of the UK hosting the international UN Climate Conference, two free official roadshows will take place in the North West, with a programme of events also planned at COP26 in Glasgow over the next fortnight.

They’ll showcase the best of the pioneering North, where major projects and initiatives are already underway to slash carbon emissions from energy, industry, transport and homes to reach net zero.

Leaders will be showcasing the best of the North West up in Glasgow, with panel sessions and discussions on the legacy of COP26 to run throughout the conference. It includes a landmark net zero event in the official Glasgow Green Zone. ‘Talking About My Generation’, on Tuesday 9 November, will see the metro mayors join innovators and young people from across the North West to discuss how education and innovation will play a crucial role in tackling climate change. The session will be free to attend to those with a green zone ticket.

Official COP26 events will also take place in the region. Free to attend, the North West COP26 regional roadshows will give those not attending Glasgow the chance to get involved in the climate conversation:

The first event will celebrate progress made to cut carbon from our job-creating, energy-intensive industries such as manufacturing and what the future holds as we reach net zero.

The second event will focus on the innovators pioneering new sources of sustainable fuel and electricity, with a focus on the built environment, transport and smart energy.

The events will showcase some of the innovative projects planned for the North West, including plans to harness tidal power via the Mersey Tidal Power project; decarbonise industries by creating and distributing hydrogen via the HyNet North West project; and the mission to create a joined-up low carbon transport network in the North West’s towns and cities. 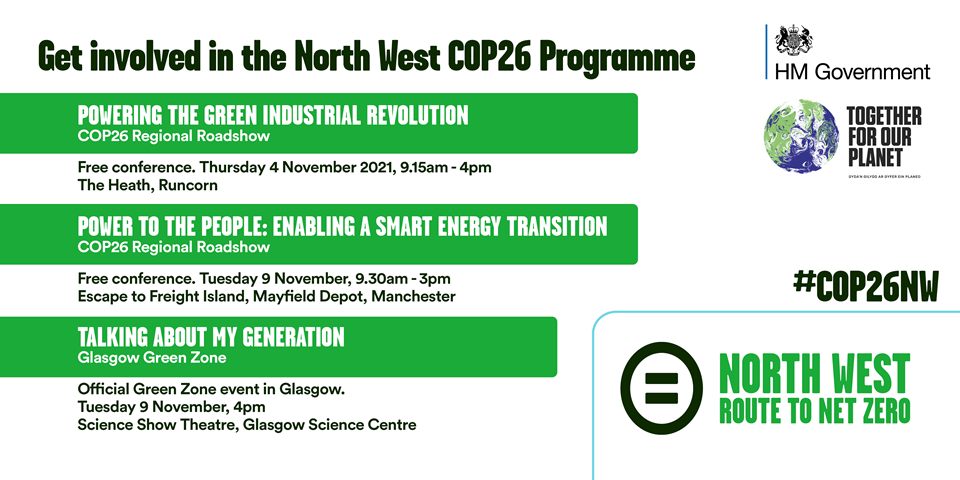 “COP26 is an internationally important event, a rare chance where the eyes of the world will be on the UK. We have a responsibility to lead international efforts to cut our carbon emissions, rapidly decarbonise and, ultimately, to save our planet. I believe that the North West will be the (clean) engine that drives that national effort, and that my region should be at the heart of that.

“I want the Liverpool City Region to be at the forefront of the green industrial revolution, leading the charge towards net zero, and taking advantage of the myriad of jobs, investment and opportunities that it will provide. From our existing strengths in wind and solar power, to revolutionary new projects like HyNet and our Mersey Tidal Power scheme, our region has the potential to be Britain’s Renewable Energy Coast – with local people benefiting from the employment and training opportunities that go with it.

“At COP26 in Glasgow, I’ll be banging the drum to make sure we get the support and investment to help make sure it happens.”

“The country is at a critical juncture on the journey to net zero. If we don’t accelerate now, we run the risk of being unable to hit our national goal of 2050.

“We’re playing our part in Greater Manchester with our ambitious plans to hit carbon neutral by 2038 – 12 years ahead of the national target. We have a detailed, science-based plan to level up our city-region with better transport, homes and jobs for our residents through retrofitting homes and buildings, smart energy and overhauling our public transport system. We also want to work with the Government to go even further and help us realise a London-style public transport system affordable and accessible to all.

“Reaching carbon neutral emissions is more than just an environmental issue. Hitting the target will transform lives in the Greater Manchester, levelling us up to one of the best and greenest places in the country. It will improve health outcomes, tackle inequalities, generate good quality and secure jobs and make our communities better to live, learn and work in. A green city-region is a levelled-up city region; a great place to live in every sense.” “We have a bold ambition to make Cheshire and Warrington the most sustainable place in the UK and achieve Net Zero. The recent announcement that HyNet North West low carbon and energy project will be one of the first two to be delivered in the UK is a huge step towards achieving this. These regional roadshows will enable the North West to showcase the actions we are taking to tackle climate change and to get involved in the conversation and see that we mean business.”

“The North West can genuinely lead the way on achieving net zero, given our unique combination of clean energy generation capabilities, the commitment of our business community to decarbonise and our exceptional natural capital, which will support carbon offsetting.

“In Cumbria LEP, we are fully committed to playing our part through supporting the development of our significant clean energy opportunities including nuclear, wind and hydro, alongside supporting our businesses to decarbonise and leveraging our exceptional environmental assets.”

“It's fantastic that the North West is coming together to showcase the vast array of capabilities within the region which, when combined, have the potential to significantly contribute to the government's net zero ambitions. In Lancashire, we not only have businesses as the forefront of developing cutting-edge technologies, some of which will be showcasing their expertise at the two events, but we also have world-class manufacturing capabilities. This makes Lancashire and the wider North West, a formidable region to tackle climate change and power the Green Industrial Revolution.”

The official North West programme is being made possible thanks to support from some of the biggest names in the North West with a role in cutting carbon emissions.

The programme is also being funded by the Department for Business, Energy and Industrial Strategy part of the UK’s official COP26 activity. Activity in the North West is being coordinated by the Local Energy North West Hub.