The rate of expansion in new orders accelerated during July. Companies reported improved inflows of new work from clients in North America, Europe, the AsiaPacific region and the Middle-East. The domestic market also remained a positive contributor to order books, although not to as great an extent as signalled earlier in the year. Manufacturing production increased for the twelfth successive month in July. Although the rate of expansion eased to its lowest since March, it remained above the long-run survey average. The consumer goods sector saw the strongest increase in output, followed closely by intermediate goods producers. 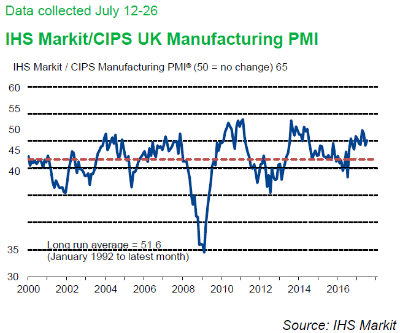 UK manufacturers maintained a positive outlook at the start of the third quarter. Almost 49% expect production to be higher in one year’s time.

Rob Dobson, Director at IHS Markit, which compiles the survey:

“UK manufacturing started the third quarter on a solid footing. The headline PMI signalled a growth acceleration for the first time in three months during July, as new order intakes were boosted by a near survey-record increase in new export business. Although the exchange rate remains a key driver of export growth, manufacturers also benefitted from stronger economic growth in key markets in the euro area, North America and Asia-Pacific regions.

“Continued expansion is also still filtering through to the labour market, with the latest round of manufacturing job creation among the best seen over the past three years.

“Price pressures also continued to ease in July, as the rates of input cost and output charge inflation both slowed further. Input prices rose at the weakest pace in over a year, down substantially from the record high seen at the start of the year. If this trend of milder price pressures is also reflected in other areas of the UK economy, this should provide the Bank of England sufficient lee-way to maintain its current supportive stance until the medium-term outlook for economic growth becomes less uncertain.”

“UK manufacturers appear to be riding high going into the second half of the year with the sector in the UK and Europe continuing to be buoyed by a recovering global economy, alongside efforts to bring new products to the market. Above trend responses across the key components of the survey would signal that the drag on overall economic growth from the sector in the second quarter of this year is likely to be temporary.

“While this is positive news for the UK’s growth outlook, at least in the short-term, it doesn’t make the Monetary Policy Committee’s balancing act any less tricky this week.  Some comfort will, however, come from further signs that cost pressures on the supply chain are easing and the pass through to consumers should be on the wane.”

“Today’s report confirms the increased confidence reported in EEF’s Regional Manufacturing Outlook last week. This is an opportune time for small and medium sized manufacturing businesses to respond and take advantage of their ability to innovate, enter new supply chains or increase sales.

“The message here is there is growth to be had – whether it be through investment, expansion or efficiency. I urge manufacturers to join the 150 businesses already supported by the Business Growth Hub’s manufacturing service, and bring in free-to-access expert advice to maximise opportunities for increased productivity.”

Do you work in the Manufacturing & Engineering industry? We have a dedicated team of specialists who can support you with tailored business support that will increase your productivity. Find out more here: Productivity in Practice

Do you work in the Manufacturing & Engineering industry? We have a dedicated team of specialists who can support you with tailored business support that will increase your productivity. Find out more here: Productivity in Practice