Greater Manchester’s leaders have thrown their support behind a campaign to ‘Build Back Better’ after COVID-19. The Hub’s low carbon lead Amy House explores what this could mean for the green economy.

In a recent survey, just nine per cent of Britons said they wanted to return to life as it was before the COVID-19 pandemic. As co-chair of the Greater Manchester Local Enterprise Partnership (LEP), Lou Cordwell, put it during a remote press conference earlier this month: “Our old normal didn’t really prioritise the things that most of us actually value the most”.

One of those things is undoubtedly the environment. For many of us, lockdown has opened our eyes to the benefits of cleaner air, quieter streets and access to nature. The opportunity we have now is to use this experience to re-build a greener, better economy that is fit for the future.

The concept of a green recovery has quickly gathered strong support from the business community. In May, more than 60 leaders of major businesses and environmental organisations sent an open letter to the Prime Minister calling for nature and the climate to be put at the heart of the recovery effort. At the international level, over 150 of the world’s biggest companies have signed a UN-backed statement asking governments to align their economic relief plans with science-based climate targets.

Here in Greater Manchester, mayor Andy Burnham and the GM LEP, along with their counterparts in the Liverpool City Region, are supporting a Build Back Better campaign that is calling on government and businesses to help set a new course post-Coronavirus. Two of the campaign’s key goals are to re-think the way we travel, by supporting active travel modes and the switch to cleaner vehicles, and to re-think the way the economy works by stimulating investment in energy efficient retrofit and low carbon buildings.

A new approach to travel

In Greater Manchester air pollution levels have dropped by around 30 per cent since lockdown began. Road traffic levels have more than halved, while cycling journeys have increased by 42 per cent. Walking and cycling now account for around a third of all journeys. These are changes we need to lock in permanently if we’re to see the long-term benefits of lower emissions and active livelihoods.

Speaking from home at a recent press conference on the Build Back Better campaign, Andy Burnham called on businesses to work with him to encourage more home and flexible working after lockdown, with staggered start and end times to the working day to reduce congestion. “The traditional 9 to 5 working day doesn’t work particularly well for us,” he said. You’d struggle to find a commuter who disagrees.

When we do need to travel, walking or cycling should be the first port of call. Greater Manchester is one of several major cities already seizing the opportunity to build on high levels of active travel during lockdown. Deansgate in the city centre (pictured above) has now been part-pedestrianised and £5 million of emergency funding has been made available to create enhanced spaces for pedestrians and cyclists across the city region. Plans for a Greater Manchester-wide bike hire scheme are also progressing.

Nationally, a £2 billion funding package was launched in May to support new cycling and walking measures, along with fast-tracked statutory guidance telling councils to reallocate road space for active travel. E-scooter trials have also been brought forward by a year to explore what effect they could have on clean transport in towns and cities.

When walking and cycling isn’t an option, we need our vehicles to be cleaner. Greater Manchester has now sent a renewed funding request to government to help businesses upgrade their old vehicles ahead of the introduction of a city region-wide Clean Air Zone. This includes a £98 million Clean Commercial Vehicle Fund for vans, HGVs and other large vehicles (increased from £59 million), and a new £10 million ‘hardship fund’ for small businesses facing additional financial concerns to help them switch to compliant vehicles. 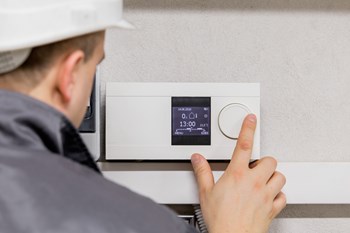 Another key agenda for Build Back Better is a programme of investment in low carbon homes, and the skills needed to deliver them. Achieving Greater Manchester’s 2038 carbon neutral target will require retrofitting at least 61,000 homes every year with energy efficient technology. This is a huge economic opportunity – one estimate suggests that domestic retrofit has the potential to support over 13,000 additional jobs in the city region to 2030. As well as upgrading existing buildings, focusing on zero carbon, modular construction methods for new housing could create thousands more jobs.

Both Greater Manchester and the Liverpool City Region have recognised this opportunity and are leading calls on the government to invest in retrofit and green construction skills as part of the national recovery effort. As Liverpool City Region mayor, Steve Rotheram, put it: “If we want to see the growth in low carbon industries, we need to be training people for the jobs in the green industrial revolution. Developing that talent pipeline for those emerging industries will be essential for this brave new world we’re emerging into.”

Local delivery is still going ahead

Dealing with the here-and-now of the Coronavirus crisis is understandably the core concern for policy makers right now, but that doesn’t mean the plan to transition to a lower carbon economy in Greater Manchester has been stopped in its tracks. The city region’s mission-based approach to delivering its 5 Year Environment Plan is still progressing behind the scenes. Online research and development is continuing unabated across five cross-sectoral ‘challenge groups’, each focusing on low carbon buildings, energy innovation, natural capital, sustainable consumption and production, and communications and engagement.

What we need now to support this progress is a collective effort at both the national and local level to ensure that the economic recovery from COVID-19 comes with green strings attached. Together we can Build Back Better.

Businesses wanting to support Build Back Better can join the campaign here.

Helping businesses to thrive in the green technologies and services sector

Explore the solutions that will make your business better

Amy is a chartered environmentalist, with over 15 years’ experience both as a commercial manager within the energy from waste sector and a business advisor in the Green Technologies and Services industry.

With an MSc in Environmental Monitoring, Modelling and Reconstruction and extensive experience in a consultancy role, she has developed a deep understanding of the technologies that make up the industry and the legislation that affects it.

She also has specialist knowledge of the sector’s supply chain and has spent over a decade developing and managing a range of programmes to support its growth across the North West of England.

This support has typically included providing tailored advice and guidance to small and medium sized businesses to achieve their growth potential through providing access to new sales opportunities, specialist training and market intelligence to help better navigate the turbulent market they operate within.

She leads a team of specialist advisors who help businesses in the sector to identify barriers to growth, raise their profile and boost sales to fast-track the successful transition to a net zero economy.

As an advocate for the sector, Amy has a key role in engaging and sharing her knowledge with both private stakeholders and public bodies to accelerate the uptake of low carbon tech and help achieve the UK’s target of becoming carbon neutral by 2050.