Low carbon lead Amy House shares the thoughts of a panel of innovators who are utilising the power of AI and data to cut carbon emissions and achieve their green objectives. 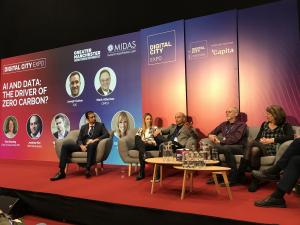 In March, Manchester hosted its first Digital City Festival – a 5-day celebration of the North’s booming digital economy. One of the many benefits of digitalisation is the potential to use data-driven technology to help us tackle climate change, so it was no surprise to see the first keynote session of the festival dedicated to the role of the digital ecosystem in helping Greater Manchester achieve its mission to become carbon neutral by 2038.

Greater Manchester’s 2038 target is an ambitious goal, but Mark believes it is possible if the power of data is leveraged to its full potential. “Greater Manchester was the first city, I think, to set a science-based target at the city level. That was based on data,” he said. “Can we do it? Yes, but it requires all of us to work together, and it particularly requires digital to work with the private and the public sector on how we can close the innovation gap.”

One area where data-driven technology can make a real difference is the development of local energy markets. “A localised approach for generation, demand management and local storage means that we can procure less energy from the grid, especially at peak periods – which means we can deliver a huge amount of savings to customers, and it benefits the system as well. That is going to happen in the next few years,” Vijay explained.

Highlighting the scale of the opportunity, Mark pointed out that Greater Manchester’s collective energy bill is around £5 billion each year. “Most of that goes outside of the region and most of it is spent on fossil fuels of one form or another. So how do we create a market where we can generate more renewable energy locally? This is where data and AI plays a huge part, because to manage that local energy market in a way which is much more customer-focused requires intelligent energy solutions. How will we make sure that we’re utilising local energy at a time when it’s cheapest for us, when it’s going to reduce the carbon emissions required from pulling in energy from the energy grid…and how do we make sure that’s done in a way where we can share energy between local communities? That’s where AI and smart data is going to be critical.”

Perhaps the biggest application for green digital technologies at the moment is in building energy management, through technologies like Internet of Things (IoT) enabled sensors. Tim, who specialises in zero carbon buildings, explained: “From a buildings perspective, IoT is absolutely fundamental, both in terms of being able to control systems but also in terms of collation of data. The big challenge once you’ve captured data is data analytics for understanding exactly what is happening in buildings, rather than what we think is happening. We can unlock significant energy and carbon savings by doing that.”

Greater Manchester is already pushing ahead in this area with demonstrator projects like Homes as Energy Systems (HAES), which is installing multiple green technologies in 700 properties and exploring how they can support a more dynamic energy grid.

Qbots is also working in this space. One of its current projects is ENERGY-IQ, a £2.2 million initiative to bring data-driven smart energy services to different types of buildings across Greater Manchester. Last year, we were able to help Qbots with the project by linking them up with a local installer of building energy management systems (BEMS).

“We wanted a company who was interacting [with buildings] and doing the installations, so we reached out to the Business Growth Hub and they found us a company, Open Control Solutions,” Vijay said. “These guys are looking at managing buildings and traditional mechanical engineering services; what we are trying to do is take that into the digital world, trying to get all the data points about the building along with energy data, and creating AI models of the building.”

Getting the data is one thing, but getting energy users to change their behaviour in response can be a challenge. Again, digital tech can provide solutions, Mark argued. “My experience suggests that there’s only three ways that we can make behaviour change happen: one is to make something cheaper, one is to make it sexier, and the third is to make it easier. I think what data and AI can do is certainly one of those things – it can make it easier; and it might also be able to make it sexier and cheaper as well.”

According to Ellen, the solutions are not as scary or expensive as most companies think: “If you look at some of the technologies out there it’s really quick and really easy; you can trial things and then you can move on.”

So how can a provider of green technologies or services start exploring the potential of AI and data in their business? The panel was unanimous: the answer is collaboration.

Jonathan recommended companies engage with their local universities. “We’re working with Manchester University and Salford University on looking at things like, for our side at TalkTalk, the router. Is there anything smart that some of these smart data companies can do that knows when you’re not in the house, and what can the router then do to switch stuff off? There’s lots of things like that where the next generation can provide some fantastic innovation. You have to open your business up to them and let them come through with their ideas.”

Mark described GMCA as a “convenor” with an open-door policy for innovators offering solutions that need testing. “It’s very much about trying to get smart people into the right rooms to have smart conversations,” he said.

Qbots has certainly made the most of local collaboration. Vijay said: “It’s fair to say we have got a lot of support from the local ecosystem and that has really helped us, from some of the smart city initiatives in Manchester and some of the local partners, including Manchester City Council, Bruntwood, Manchester Science Partnerships…they’ve all helped us because they can trial our technology, test our ideas, give feedback and that helps us to quickly improve our proposition to the wider market.

“If we can have problem statements from all these bigger organisations, innovators can engage with them and create demonstration projects which can then be scaled up.”

The opportunities are limitless

The panel all agreed that the applications for data and AI in green tech are almost limitless. As Tim concluded: “That’s the beauty of the whole digital arena – you can have quite a small start-up with quite a small amount of capital investment, and [still] make a massive difference.”

This article originally appeared on http://www.greenintelligence.org.uk/article/how-digital-revolution-can-power-us-zero-carbon