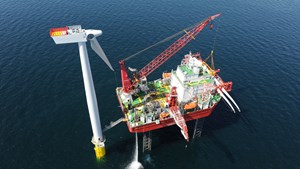 Danish utility and offshore wind specialist, DONG Energy, reached a final investment decision for the development at the end of October.

The 87-turbine extension is the third phase of development at the Walney site, which sits 19km off the Cumbrian coast. The world’s largest offshore wind farm is currently the 630MW London Array wind farm in the outer Thames Estuary, which was also developed by DONG Energy.

Once the extension is completed in 2018, the full Walney offshore wind project is expected to reach a generation capacity of over 1GW – around a fifth of current total UK offshore wind capacity.

DONG will receive a fixed price on the electricity generated for the first 15 years of the extension’s lifetime.

The project is the latest in a string of recent successes for the North West wind sector despite uncertain market conditions for investors.

“British offshore wind has seen phenomenal growth in recent years”, he added. “A prerequisite for long-term growth in the industry is that offshore wind eventually can compete on costs with other energy technologies.

“Building Walney Extension will bring us one step closer to that target and I’m satisfied to see that we keep bringing costs down, while continuing to expand the UK supply chain. I’m also excited about the fact that turbine blades, part of the foundations and cable installation will come from UK manufacturing facilities and create local jobs.”

Offshore wind has played a leading role in a surge in renewable electricity generation over the last year.

According to the latest figures from the Department of Energy and Climate Change (DECC), electricity generation from offshore wind in the second quarter of 2015 was up 70 per cent compared to 2014.

Around 5GW of new generation capacity (including the Walney Extension) is now in the pipeline, enough to double the amount of electricity the UK currently generates through offshore wind.