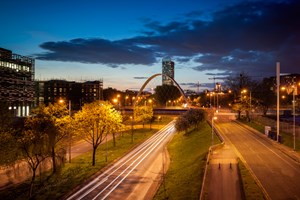 A group of 23 councils across England - including seven in Greater Manchester - have submitted their first official plans to cut air pollution following a High Court order last year.

The councils are those deemed to have the worst levels of air pollution in the country. All 23 had to submit draft feasibility studies by 31 March for reducing nitrogen dioxide (NO2) pollution - mainly from diesel emissions - to legal levels in the shortest time possible.

In the North West, the implicated councils were Manchester, Stockport, Tameside, Salford, Trafford, Bolton and Bury.

Most councils did not publicly release full details of their plans, which will need to be consulted on later in the year.

Proposals on the table

Elsewhere in the country, Bath is considering a ‘class B, C or D’ Clean Air Zone in its city centre, which ranges from charging all except the cleanest petrol (Euro 4) and diesel (Euro 6) vehicles, to just charging vans and lorries.

Bristol is considering either a similar charging zone or a non-charging option to restrict the movement of diesel cars and goods vehicles during peak hours.

Derby is exploring the potential of a local scrappage scheme offering residents and businesses a cash incentive for trading in older diesel vehicles for cleaner alternatives.

Following another court order in February, a further 33 councils also now have to submit plans to government by the end of July, including Burnley, Oldham, Liverpool and Sefton.

Liverpool City Council has already jumped the gun by announcing a range of draft measures, such as replacing all its diesel-powered vehicles in the city centre by next year and introducing a car salary sacrifice scheme to encourage employees to purchase cleaner vehicles.

A penalty scheme could also be put in place to discourage engine idling in the city centre, while new planning policies could force developers to incorporate electric vehicle charging points in car parks.