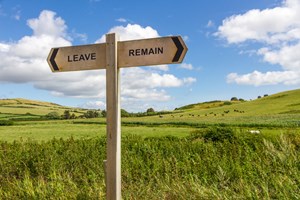 With the government’s Brexit plans caught in a state of flux, concerns are mounting about the possible environmental impacts of a no deal Brexit.

Theresa May’s government has always maintained that it aims to achieve a ‘Green Brexit’ no matter what the situation on 29 March 2019, when the UK is currently due to leave the EU with or without a deal in place.

Nevertheless, many experts are concerned that a no deal scenario puts this commitment in jeopardy.

Most green policies and law in the UK are either directly or indirectly underpinned by EU legislation. Official guidance on the approach to environmental standards in the case of a no deal, published in December, says the government is committed to ensuring all existing EU environmental law will continue to operate in UK law after Brexit. Parliament will then be able to adjust legislation itself in future.

The first Environment Bill for 20 years will put in place a new framework for environmental regulation, with a new independent body installed to hold government to account on environmental performance.

The government has even suggested the UK will go “over and above” some EU environmental standards, such as air quality and resource efficiency, in line with its 25 Year Environment Plan.

However, the draft Environment Bill will be debated in Parliament later this spring and will therefore not be in place before 29 March - leaving a gap in the event of a no-deal scenario.

Craig Bennett, chief executive of Friends of the Earth, argued: “A no-deal Brexit would leave the UK without all the environmental protections we need, and nobody to enforce the ones we do have.

“Not only that, but political desire to get the economy moving will likely lead to pressure to lower standards to secure quick trade deals, and the chaos of a no deal could push much needed environmental ambition to the back of the queue.”

The government said it was “considering” what interim measures might be necessary in a no deal scenario before the Environment Act comes into effect.

Speaking in the House of Commons on 21 January, Theresa May indicated that she could accept an amendment put forward by MPs to guarantee that existing environmental rules will not be watered down at any point after Brexit. The amendment would also give MPs an opportunity to adopt any environmental standards the EU passes in future.