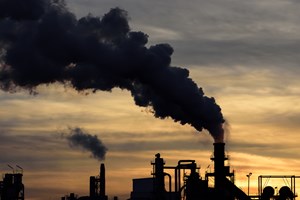 The latest assessment of the climate change crisis from the world’s leading scientists made headlines around the world, and business have a crucial role to play in the global response.

The Intergovernmental Panel on Climate Change (IPCC), the globe’s leading scientific authority on the issue, has revealed that “rapid, far-reaching and unprecedented changes in all aspects of society” are needed immediately to avert the worst effects of climate change.

If the planet is to have a good chance of avoiding global warming of 1.5ºC on pre-industrial levels - a non-binding commitment agreed by nearly 200 countries in 2015 - the global economy must emit no more than 420 gigatonnes of carbon into the atmosphere. At current rates, this will last just a decade.

Evidence suggests that the world is already 1ºC warmer and is currently on course for 3ºC by the end of the century, which scientists warn would be catastrophic for mankind and the planet. For example, even a 1.5ºC rise will see most of the world’s coral reefs wiped out.

“The next few years are probably the most important in our history”, said Dr Debra Roberts, co-chair of one of the IPCC’s three Working Groups.

What role for business?

A growing number of global companies are adopting ambitious, science-based ‘net-zero’ emissions targets to work towards these goals, but experts are also urging smaller businesses to do what they can to play a part in the transition.

Sourcing clean power is one of the more-achievable goals for businesses in the short-term, along with a more aggressive approach to energy efficiency - a triple-win that boosts the bottom line and energy security as well as reducing emissions.

However, improvements in efficiency will not be enough - businesses will have to play their part in developing and shifting to new products and services that support sustainable lifestyles.

“We stand at a crossroads. Business leaders have unprecedented opportunities to redefine how we create prosperity by developing new products, services and business models that rapidly bring us closer to a zero carbon, resilient world”, said Gundrun Cartwright, environment director at responsible business group, Business in the Community.

“Business must drive change in partnership with suppliers and engage customers to imagine how life could be better, more fulfilling and rewarding through lifestyles that are more in harmony with a ‘one planet’ economy.”