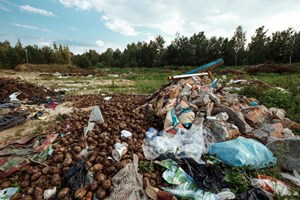 A Manchester man has been jailed for illegally dumping 100 tonnes of waste in a school car park, shortly after new research identified Liverpool and Manchester as two of the worst cities for fly-tipping.

The Environment Agency has confirmed that the man was jailed for 12 months after cutting the gates to a special school in Oldham, leaving a huge amount of pungent, processed waste on the car park.

The school pupils, some with life-limiting conditions, had their education disrupted for two weeks due to the waste.

The incident is one of the more extreme examples of a waste crime epidemic spreading across the UK.

According to new research from The Furniture Recycling (TFR) Group in Blackburn, over 646,000 fly-tipping incidents have been recorded in just five UK cities since 2013. After London, Manchester and Liverpool have the highest number of incidents, with over 91,100 and 74,900 recorded respectively.

Nick Oettinger, managing director of TFR Group, said: “It’s a problem that affects everyone, ruins our cities and countryside and simply passes the waste problem on to someone else.

“We’re calling on the government to do more to ensure that designers, manufacturers and retailers take into account the end-of-life of their products, such as mattresses. This will go some way to reducing the amount of fly-tipping we see across all parts of the country and ensure the end of a product’s life is simply the start of a new one.

“Additionally, we have conducted recent research indicating that England will reach crisis point soon if there isn’t an immediate focus on the recycling of bulkier waste streams, which are difficult to compress and take up a huge amount of landfill space.”

Previous research from Greater Manchester based waste specialist Dsposal found that businesses and members of the public were being easily misled by waste criminals, with Greater Manchester experiencing nearly 144 incidents of fly-tipping every day,

Businesses have a legal responsibility to ensure they pass their waste to a licensed operator and can face fines for failing to do so, but a survey of 1,000 businesses in 2016 revealed that almost half were unsure about where their waste goes.

For example, a Cheshire company was fined £5,000 in 2017 after its waste was illegally dumped by a third party without its knowledge.