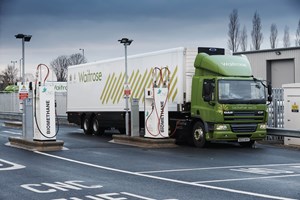 Waitrose is one of several companies that has been using the station, which is the first in the UK on the high pressure gas network to provide 100 per cent renewable biomethane.

The station, which is situated at junction 28 of the M6, has just completed its first 14 months of operation and can serve up to 600 gas-powered HGVs.

Waitrose’ CNG lorries have a range of up to 500 miles and have been used across the Midlands and the North.

Justin Laney, general manager of transport at the John Lewis Partnership, which includes Waitrose, said: “As well as being quieter, every long-distance lorry we switch from diesel to gas saves as much CO2 as taking 70 cars off the road. This is why we plan to switch more of our trucks to biomethane in the future.”

According to Cadent, the gas network operator for the North West which commissioned the analysis, the results show that CNG should be the fuel of choice for HGVs in the future.

“Biomethane CNG is a green fuel, and with up to 99 per cent reduction in emissions of nitrogen oxides, it can help clean air in our towns and cities, as well as reducing transport’s current high level of carbon emissions.”

Philip Fjeld, chief executive of CNG Fuels, which operates the Leyland gas station, added: “Biomethane CNG is 35 to 40 per cent cheaper than diesel and attracting growing interest from fleet operators, bus companies and refuse collectors, who want to cut costs and reduce their carbon emissions.

“CNG stations can be built quickly and cost-effectively and we are developing a nationwide network to meet industry demand.”

Gas-powered HGVs are also being piloted in other areas of the country by major fleet operators, including Asda and logistics firms Kuehne + Nagel, Great Bear, Wicanton, Brit European and Howard Tenens.