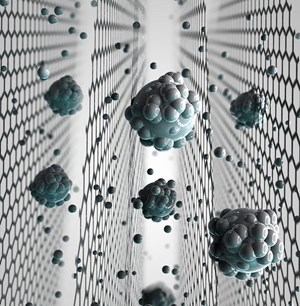 Research at the University of Manchester has demonstrated the potential of using the wonder material graphene as a ‘sieve’ to produce clean water from seawater.

The findings of a group of scientists at the university’s National Graphene Institute show for the first time the real-world potential of using graphene technology to provide clean drinking water for millions of people who struggle to access adequate clean water sources.

The technology has the potential to revolutionise water filtration across the globe.

The process involves using graphene-laced membranes to filter out common salts found in seawater. The pores in the membrane can be precisely controlled in size to sieve out salt molecules while allowing water molecules to pass through.

Innovative desalination technologies are expected to become vital tools in future, even for wealthy countries, due to the effects of climate change on water supplies.

By 2025, the UN expects 14 per cent of the world’s population to be in water scarcity.

Prof Rahul Nair at the University of Manchester said: “Realisation of scalable membranes with uniform pore size down to atomic scale is a significant step forward and will open new possibilities for improving the efficiency of desalination technology.

“This is the first clear-cut experiment [that] demonstrates that there are realistic possibilities to scale up the described approach and mass produce graphene-based membranes with required sieve sizes.”

Despite only recently being discovered in 2004, graphene is already starting to enter commercial space – particularly for clean and environmental technologies.

In 2016, Oldham-based chemicals manufacturer James Briggs announced that it was beginning to use graphene to improve the lifespan of high-performance paints.

Manchester-based HMG Paints is also researching the potential of using the technology in its products.