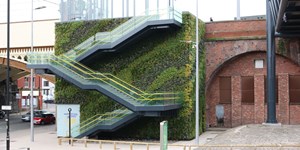 The University of Salford is planning to create a ‘Living Laboratory’ for urban green technologies such as green roofs and walls to help Greater Manchester adapt to the future impacts of climate change.

Scientists and built environment experts at the university have secured €2 million of European funding to showcase promising examples of urban green infrastructure with the aim of encouraging businesses and organisations to invest in them.

The Living Lab, which is part of a wider €6 million Greater Manchester project called ‘Ignition’, will use sensors to measure temperature, humidity, energy use, carbon and noise absorption.

Green infrastructure, such as the green wall at Manchester’s Deansgate station (pictured), can help cities to adapt to the effects of climate change by offsetting flooding and cooling the air during heatwaves, as well as improving air quality and well-being.

“The Living Lab on the Salford campus will be an amazing visual and technical demonstration of the measures needed by areas like Greater Manchester to adapt to the increasing impacts of climate change and more extreme weather.

“We will be working with our partners to increase the city region’s urban green infrastructure by ten per cent.”

Dr Nick Davies, a researcher in urban ecology at Salford’s School of Built Environment, said: “A lot of organisations are talking about green features but are uncertain as to which work and whether they are cost-effective.

“The labs will be live demonstrations of how these features work and can help show the value of them.”