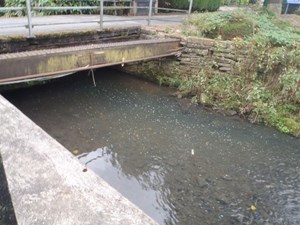 A leak that dumped thousands of tonnes of untreated sewage into the River Medlock in Greater Manchester has landed United Utilities with a hefty fine that sends a ‘strong message’ to others.

The leak in October 2014 caused 21,700 cubic metres of raw sewage to be discharged into the environment, killing fish and leaving a four kilometre stretch of the river covered in ‘grey sludge’.

The problem was caused by a simple worn-out nut on a door valve at a sewage tank, which was not fixed despite being identified three days earlier. The fault meant the tank was not emptying into the foul sewer network as quickly as it should have been.

The Environment Agency was informed by a member of the public after the ‘grey sludge’ appeared in the water.

At Manchester Crown Court, United Utilities pleaded guilty to causing a water discharge activity not under, and to the extent authorised by, an Environmental Permit, contrary to the Environmental Permitting (England and Wales) Regulations 2010. The company was fined £666,000 and ordered to pay additional costs of £32,000.

Mark Easedale, Environment Agency environment manager for Greater Manchester, said the case “demonstrates just how important it is that water companies and wider industries maintain their equipment in order to prevent pollution”.

“The sewage that was discharged had a significant impact on the River Medlock, killing brown trout, which are a key indicator species of good water quality. The Environment Agency take pollution incidents very seriously and this case should send a strong message to companies of the potential consequences if they damage the environment”, he added.

“In the three years since the incident we have upgraded alert systems, introduced new alarm procedures and enhanced the control valve. We are investing a further £50 million in improvements along the River Medlock”, he said.