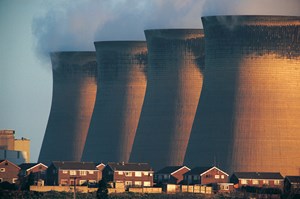 The UK’s carbon emissions have fallen by 35 per cent since 1990, and current targets remain sufficient to meet national and international obligations according to the Committee on Climate Change (CCC).

About half of the decrease is thought to be due to an unusually warm 2014 relative to the previous year, but the remaining half has been achieved through the deployment of renewable energy and energy efficiency technologies, and a reduction in the use of coal power.

The 2014 figures show that the UK has already exceeded its EU target to reduce emissions by 20 per cent against 1990 levels by 2020, and it is still on track to meet its domestic goals of a 29 per cent reduction by 2017.

At the end of January, the CCC, which advises the Government on climate change matters, confirmed that current carbon reduction targets were sufficient to meet the ramped up ambitions of the Paris climate accord.

The ‘Paris Agreement’ was signed in December by 195 countries and commits to keeping global temperatures rises to "well below" 2˚C (above pre-industrial levels) and trying to limit them to 1.5˚C if at all possible.

Ahead of this summit, the CCC proposed that the UK Government should be aiming to limit CO2e emissions to 57 per cent by 2032 (relative to 1990 levels) to keep on a cost-effective path to its overall goal of an 80 per cent reduction by the middle of this century.

The Government’s five-yearly Carbon Budgets are designed to help it meet the 2050 target enshrined in the Climate Change Act. The UK is currently working towards its second budget, which covers 2013 to 2017.

Although the CCC has confirmed that its recommendations for the UK’s fifth Carbon Budget (covering 2028 to 2032) will remain unchanged, it has also warned that urgent action is required to get back on track for the fourth Carbon Budget (2023 to 2028), and that targets may still need to change in the future, particularly if EU legislation is tightened up.

In a letter to Amber Rudd, the energy and climate change secretary, Lord Deben, chair of the CCC wrote: "The [Paris] Agreement, combined with requirements under the Climate Change Act, make it clear that this is the minimum level of UK ambition necessary.

"Our judgement is that our existing recommendation is sufficient at this time, although a tighter budget may be needed in future."

The Committee has also outlined a series of contingency measures for 2028 to 2032, in case existing UK policies fail to work or the EU increases its emissions targets to reflect the scope of the Paris Agreement, for example by tightening up the EU Emissions Trading Scheme cap.

In New York, at a recent meeting of 500 global investors, UN secretary general Ban Ki-moon called on businesses to move from “aspiration to action”, to help ensure the success of the Paris Agreement.

Ban said: “I call on the investor community to build on the strong momentum from Paris and seize the opportunities for clean energy growth. I challenge investors to double – at a minimum – their clean energy investments by 2020.”