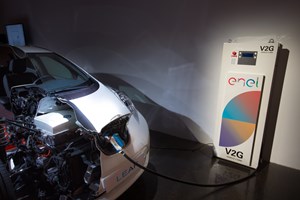 The UK is set to pioneer the rollout of automated and electric cars, with Nissan and Volvo launching innovative pilots and legislation being planned to expand the uptake of electric vehicles.

Green transportation featured strongly in the Queen’s Speech marking the State Opening of Parliament on 18 May, with the Queen stating that legislation will be put in place to “ensure the United Kingdom is at the forefront of technology for new forms of transport, including autonomous and electric vehicles”.

A week earlier, Nissan launched a ground-breaking project in the UK that will enable owners of Nissan electric vehicles to sell stored energy from their vehicle battery back to the National Grid at peak times.

The collaborative vehicle-to-grid (V2G) pilot, a collaboration between Nissan and power company, Enel, will install 100 V2G connections agreed by private and fleet owners of the Nissan LEAF and e-NV200 electric van.

The project is set to revolutionise how energy is supplied to the grid, allowing vehicle owners to effectively become energy suppliers.

With the National Grid estimating that there could be up to 700,000 electric vehicles on UK roads by 2020, the technology could play an important role in stabilising the energy grid in future as intermittent renewable electricity generation becomes more dominant.

Paul Willcox, chairman of Nissan Europe, said: “We see electric vehicles as being the mobile energy hubs of the future, pioneering a self-sustaining energy infrastructure that will help solve the capacity issues of the future.

“By enabling customers to sell energy back to the grid, we’re providing a financial incentive to choose the sustainable option.”

Meanwhile, the future of driverless vehicles has also taken a leap forward, with Volvo set to launch a pilot project that will see up to 100 semi-autonomous cars on London’s roads by 2018 as part of a wider plan to sell one million electric vehicles by 2020.

The Government believes that consumers will be able to buy the first generation of semi-autonomous vehicles within the next four years.

Todd Holden, director of low carbon at the Greater Manchester Business Growth Hub, said the concept could be a “game changer” for transportation.

Writing in the Greater Manchester 53 Degrees magazine, he said: “Think about the benefits of fully automated taxis that already know where you’re going, the fuel efficiency gains, the improved safety, the end of the endlessly congested city, all the extra time (and money) we’d have.

“The support is already here at home; Business Secretary, Sajid Javid, and the Chancellor have pledged to introduce legislation to allow driverless cars on British roads by 2020.”