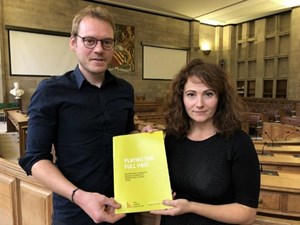 Manchester is planning to bring forward its ambition to become a zero carbon city by twelve years to 2038 - making it one of the most ambitious cities in the world in the fight against climate change.

Manchester City Council’s Executive has formally adopted the new target in line with research carried out by the Tyndall Centre for Climate Change at the University of Manchester.

Under the new plan, ‘Playing Our Full Part’, Manchester will adopt a science-based ‘carbon budget’ that caps total emissions between 2018 and 2100. The budget will require a 13 per cent year-on-year reduction in emissions from 2018 onwards - becoming zero carbon by 2038, well in advance of the previous 2050 target.

The race to zero

All of the city’s business sectors will need to greatly reduce their carbon emissions if the target is to be met. Cllr Angeliki Stogia, executive member for the environment, planning and transport at Manchester City Council, described it as “challenging” but necessary “if we are to play our full part in limiting the future impacts of climate change”.

The commitment means Manchester joins Bristol as the most ambitious cities in the UK. Bristol unveiled its own goal of becoming ‘carbon neutral’ by 2030 in the same week.

Lord Deben, chair of the UK Committee on Climate Change, the government’s climate watchdog, praised Manchester’s announcement: “This gives me real hope. How typical of Manchester to step forward and lead in this way.

“Making changes is never easy but cleaning up the local economy will really help people in Manchester and could become a blueprint for other cities around the world. My Committee is here to help, as am I.”

Government minister for energy and clean growth, Claire Perry, said Manchester was ”seizing one of the greatest industrial opportunities of our time”, while Manchester MP Lucy Powell added that the target could help people affected by the loss of industrial jobs, high energy bills and air pollution.

With the target now endorsed, the city council will flesh out the details in a draft action plan by March 2019, ahead of producing a final plan by 2020.