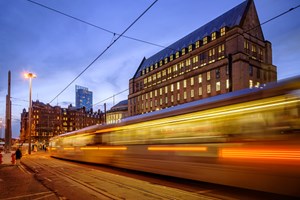 Greater Manchester has taken one step towards a fully integrated public transport system by introducing a single smart card for all bus and tram journeys.

The ‘get me there’ smart card, introduced initially for the metrolink tram system, has now been rolled out to all bus routes in the city, meaning passengers can seamlessly use both modes of transport with just one card.

The move takes Greater Manchester one step closer to London’s Oyster card concept, where passengers can use the same travel card for buses, trains and the London Underground.

The next phase of the roll out - to include train travel in the scheme - is expected by 2021.

Greater Manchester mayor Andy Burnham said: “The expansion of get me there will certainly help make travel easier and, for the first time, enable people across Greater Manchester to hop on and off trams and buses with their smart card.

“All this can only be good news and will, I hope, encourage more people than ever before to get on board with public transport, which will help tackle congestion and air quality issues.”

In June, the mayor announced his own clean air pledge by promising to leave his car at home and take public transport to work at least once a week.

Businesses in Greater Manchester can access grants of up to £10,000 from TfGM to encourage sustainable travel amongst their employees, which can lead to increased productivity and a happier, healthier workforce.

Posted under General Interest on 16 August 2017