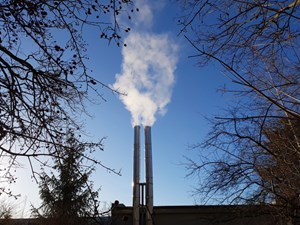 The government has published a new Clean Air Strategy with the hope of tackling sources of air pollution from all sectors of the economy, beyond just transport pollution.

Much has been made of transport pollution in recent years, with the government forced by the courts to take tougher action in towns and cities and announcing a ban on new diesel and petrol cars and vans from 2040.

However, the government’s latest instalment of air quality policy focuses on other forms of pollution. This includes particulate matter (PM) - tiny particulates that can enter the human body - which is released in vehicle emissions but also through other activities, such as the burning of solid fuels.

‘Transport only part of the story’

PM emissions had been falling steadily in recent decades but have recently stabilised, partly due to an increase in the popularity of wood burning stoves in homes.

In response, the government has set out plans to ban the sale of the most polluting domestic fuels such as coal and ‘wet wood’ and ensure that only the cleanest stoves are available for sale by 2022. The strategy also announces plans to tackle ammonia emissions from farming and the government said it would “consider” tighter emissions standards for some industrial equipment.

Launching the strategy, environment secretary Michael Gove said: “While air pollution may conjure images of traffic jams and exhaust fumes, transport is only one part of the story and the new strategy sets out the important role all of us - across all sectors of work and society - can play in reducing emissions and cleaning up our air to protect our health.”

Nothing new on transport emissions was announced in the strategy, with the government resisting a call backed by several mayors and city leaders to bring forward the 2040 ban on diesel and petrol sales.

Measures to cut transport pollution in the near-term now rest on local action by councils across the country, with Greater Manchester one of the areas considering charging zones for certain vehicles.