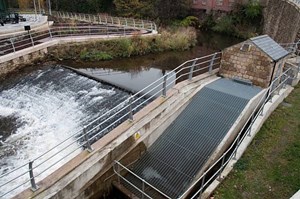 Transport for Greater Manchester (TfGM) was shortlisted in the 2015 Local Government Chronicle Awards in recognition of its Ticket 2 Kyoto (T2K) scheme to reduce carbon emissions from public transport.

The four-year European project, which also involved transport operators in Germany, France, the Netherlands and Belgium, aimed to reduce carbon emissions in the public transport sector through improvements to energy provision infrastructure for transport.

As part of the project, TfGM introduced a number of European-first energy-generation schemes for transport.

In 2012, a wind turbine was installed at the Horwich Parkway railway station in Bolton, providing around half of the electricity needed to power the station. The following year, the innovative Rochdale interchange opened - the first transport hub in Europe to be powered by hydroelectricity after being connected to a screw-driven turbine on the River Roch (pictured).

More recently, a 53-panel solar PV system has been installed at the Altrincham interchange as part of a £19 million redevelopment.

Since the start of the T2K project, TfGM has reduced its carbon emissions by 19 per cent and is the first UK transport authority to commit to becoming zero carbon.

This is despite a rise in energy usage in recent years due to the expansion of infrastructure and growing use of public transport.

TfGM has also replaced around 52,000 traffic signal light bulbs in Greater Manchester with LEDs in a move that is expected to save a total of £1 million and cut the energy consumption of the region’s traffic light network in half.

Councillor Andrew Fender, chair of the TfGM committee, said: “Our involvement in Ticket 2 Kyoto has seen us invest in some really innovative green projects over the last few years, and it’s great that they have been recognised as some of the best of their kind in the country.

“Traffic counts for a third of carbon emissions in Greater Manchester, and our ambitious carbon savings target aims to tackle that problem.”

TfGM’s progress was shortlisted in the environment category of the 2015 Local Government Chronicle Awards, which were announced this month.

Posted under General Interest on 13 March 2015