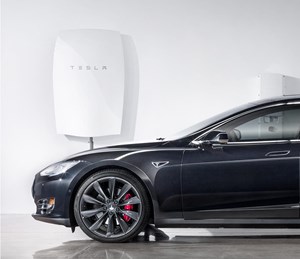 The latest energy storage technology unveiled by electric car manufacturer, Tesla, has the potential to revolutionise the energy system for homes and businesses, according to renewable energy experts.

The lithium-ion ‘Powerwall’ battery system, launched by Tesla in April 2015, is the most high profile technology to date for storing locally generated electricity.

The wall-mounted units are designed to store electricity generated onsite, for example from solar PV arrays, allowing it to be released in periods of peak demand or when utility rates are highest, thus reducing costs and dependence on conventional energy utilities.

The system has already been installed in 300 homes in California as part of a pilot test, and will be on the sale in the US later this year, starting with models of up to 10kWh in capacity but with plans to introduce 100kWh systems for larger businesses in future.

A number of major companies, including Amazon, have already pledged to adopt the system.

According to Catherine Mitchell, professor of energy policy at the University of Exeter, the technology marks “another nail in the coffin of conventional utilities”.

“Energy storage offers the ability to extend both the displacement of fossil fuels and reduction of prices beyond peaks – making it even worse for companies whose business models are based on fossil fuels and peak pricing profits”, she said.

“The question is no longer whether decentralisation will happen within the energy system, but when the tipping point will be.”

Nina Skorupska, chief executive at the Renewable Energy Association (REA), said that a widespread adoption of energy storage technology in the UK is “already moving towards being a reality”, highlighting that there are already several projects closer to home that are implementing similar technologies.

“The attention garnered by such a high profile company [as Tesla] is welcome, but it’s important to note that the UK has several innovative home grown battery companies that also supply homes and businesses”, she said.

UK renewable energy utility, Ecotricity, is planning to pilot its own storage device in homes later this year, while a landmark £2 million ‘energy storage test bed’ has just been launched at Newcastle University to help make the UK a global leader in the adoption, deployment and integration of energy storage technologies.

Large-scale energy storage is also set to be tested in Manchester as part of a collaborative European project to develop smart city districts.

Posted under General Interest on 12 May 2015