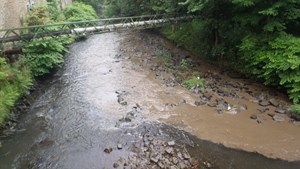 Supermarket giant Tesco has been ordered to pay over £8 million in fines after 23,500 litres of petrol escaped from a petrol filling tank, affecting wildlife and residents across a wide area.

The leaked petrol entered the sewerage system, forcing some residents to leave their homes up to 1km away due to petrol odours. A number of people had to seek medical attention with headaches and sickness.

Some of the petrol also entered local rivers, including the River Irwell, causing a significant impact on aquatic life. Anglers reported dead fish in Bury – more than six miles downstream.

The Environment Agency’s joint investigation found that the incident resulted from Tesco’s failure to address a known issue with part of its fuel delivery system, and an inadequate alarm system that was compounded by poor emergency procedures.

Tesco was found to have breached its Environment Permit under Environmental Permitting (England and Wales) Regulations 2010, as well as contravening the Dangerous Substances and Explosive Atmospheres Regulations (DSEAR) 2002.

It will now have to pay £5 million for health and safety offences and £3 million for environmental offences, as well as covering investigation costs of more than £57,000.

Speaking at the sentence hearing on 19 June, Mark Easedale, environment manager for the Environment Agency, said: “This pollution incident had a dramatically negative impact on the local community and the environment.

“The sentencing today sends out a clear message to anyone whose recklessness causes serious pollution to the environment – we will be relentless in our investigations and take action wherever needed.”

Tesco has confirmed that it has inspected all relevant refuelling stations since the incident and has introduced a new monitoring system.