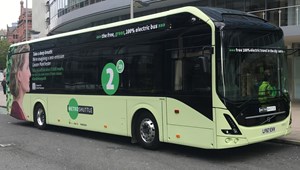 Greater Manchester has opened a public consultation on measures to tackle congestion and air quality in a bid to “try everything else” before considering a congestion charge.

Dubbed a ‘congestion conversation’, the consultation is open to the public to draw feedback on how oversubscribed roads are impacting residents and businesses, and what can be done about it.

Responses will feed into a final plan that will be published in January 2018, as mandated by the government’s national plan to improve air quality in towns and cities.

‘What would it take?’

According to recent research, Manchester is the second most congested city in the UK after London, with residents losing nearly 40 hours a year caught in traffic.

The annual cost to the city’s economy is estimated to be worth £1.3 billion in health impacts, lost productivity and late deliveries.

Greater Manchester mayor Andy Burnham said: “I want to find out what it would take to encourage people to leave their cars at home and instead use public transport, cycle to work, or car share with others.”

Speaking to Manchester Evening News, the mayor said that he intended to avoid having to introduce a congestion charge on drivers, but would not rule out one for HGVs.

“In the end we’ve got to have air in compliance with legal standards. My commitment is I will try everything else first [before introducing a congestion charge].

“If it ever is to happen here, you are talking a long way down the line and even if it did I would go to restricting buses and HGVs. I’m not going to implement that charge on car users.”

Alongside measures to improve public transport and cycling infrastructure, encouraging car sharing is on the cards - for example by allowing multiple-occupancy cars in bus lanes. More than 80 per cent of car journeys in the region are currently single-occupancy.

The mayor also added that businesses could contribute by offering staff flexible working hours to take the pressure of roads at peak times.

“The question is, can businesses offer hours in a more structured way that could help?”

The public consultation is open until 3 November. For more information, click here.

Posted under General Interest on 27 September 2017