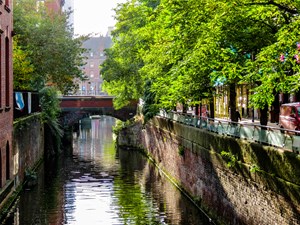 One month on from mayor Andy Burnham’s landmark Green Summit, a leading climate change academic says sustainability now has to be central to everything Greater Manchester does.

The city region’s inaugural Green Summit on 21 March saw Andy Burnham set out plans for a city where “all businesses need to need to become green businesses”.

In the lead up to the summit, the University of Manchester’s Tyndall centre, a leading climate change and energy research hub, was asked to provide an evidence-based target date for ‘carbon neutrality’ for Greater Manchester.

The date provided was 2038 - just 20 years from now and far earlier than the city region’s existing 2050 target.

Dr Carly McLachlan, director of Tyndall Manchester, said: “Our research shows that Manchester drastically needs to reduce its emissions if it is to play a ‘fair’ role in limiting global warming.

“It also shows we need to do it much quicker than is generally accepted by many academics, businesses and policymakers alike. To reach this goal a minimum of a 10 per cent CO2 reduction is needed every year.

“All of the things we have known we need to do – retrofitting houses, building only zero or carbon positive homes, deploying electric personal and public transport, making it easy to roll out renewable developments – we need to get on with.”

Dr McLachlan identified a number of positive outcomes from the Summit, including plans for a smart city energy plan by September 2018, but called for urgency ahead of the next Summit in 2019.

“To deliver at the scale and speed we need, sustainability now has to be central to everything we do. It has to become part of the Greater Manchester DNA.

“Sustainability isn’t an add-on but a pathway to delivering a better quality of life for citizens – with good stable jobs, clean air, efficient transport and comfortable homes. The hard work starts here, but the rewards will be transformational.”

Posted under General Interest on 2 May 2018