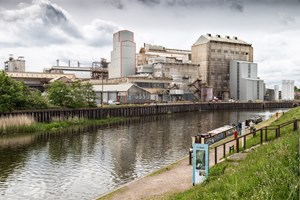 A £5.5 million steam turbine has been installed at a chemicals site in Cheshire to generate electricity from waste heat, making it one of the most efficient combined heat and power (CHP) plants in the country.

The super-efficient turbine is housed within a CHP plant owned and operated by Tata Chemicals Europe at its site in Northwich.

The project was backed by a £2.5 million government grant and makes the CHP plant one of the most efficient in the country, capable of providing energy for Tata Chemicals Europe’s sites across Cheshire and for the National Grid.

The plant will generate over 100,000MWh of electricity in a typical year, enough to power 200,000 households - an area the size of Liverpool.

By displacing the need for electricity generated elsewhere on the grid, the project will also save 71,000 tonnes of CO2e a year.

Dr Martin Ashcroft, managing director of Tata Chemicals Europe, said that the turbine was “a great achievement by all involved” and was “fundamental to the success of our Northwich operations.”

Energy supplier E.ON was a strategic partner in the project, helping Tata Chemicals Europe to maximise the energy efficiency of its site.

Mike Wake, head of business heat and power solutions at E.ON, said: “Taking advantage of heat energy as steam and using it more effectively means we can help reduce this site’s carbon footprint whilst ensuring a chemical works which has been operating since 1874 continues to go from strength to strength in such a commercially challenging time.”

By simultaneously generating heat and power on-site, CHP is significantly more efficient than conventional power generation, where heat is not captured.

It is particularly suitable for organisations with extended periods of heat or cooling demand, such as those in the leisure, manufacturing, healthcare, education and retail sectors.

Government figures show that around six per cent of UK electricity is generated by CHP, but it remains underexploited according to Manchester-based specialists, ENER-G.

A guide to small-scale CHP systems was published by the firm earlier in 2016.