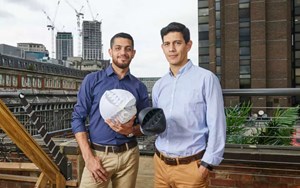 Two Lancaster University students have been named as winners of the 2018 UK James Dyson Award for their novel wind turbine invention that can capture urban wind in cities.

While traditional wind turbines only capture wind travelling in one direction, the ‘O-Wind Turbine’ is designed to utilise unpredictable wind movements in cities - where buildings catapult wind in different directions.

A simple geometric shape allows the turbine to spin when wind hits it from any direction, driving a generator which converts the energy into electricity.

The designers, Nicolas Orellana and Yaseen Noorani, are both studying for Masters degrees at Lancaster University. They are now seeking investors to turn the idea into reality and hope the turbines will eventually be installed on large structures, such as the sides of buildings or balconies.

Professor Harry Hoster, who advised and supported the design process, said: “When the two students first approached us about test facilities for a new wind turbine design, we first thought it would just be the 23rd variation of some ‘plain vanilla’ system. When they humbly showed their video and their prototype, however, we were, excuse the pun, blown away.

“If things go right, its ability to capture any random breezes will take urban energy harvesting to another level.”

Sir Kenneth Grange, chair of judges for the award, added: “I was captivated by the simplicity of the design, relative to the enormous ambition of competing in the renewable energy sector. These innovators show promise as early pioneers.”