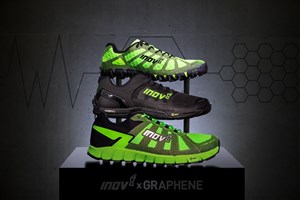 The world’s first sports shoes to utilise the 2D ‘wonder material’ graphene have been unveiled by the University of Manchester and British sports brand inov-8.

Working with graphene experts at Manchester’s National Graphene Institute, ionv-8 has developed a graphene-enhanced rubber sole for running shoes that has outlasted 1,000 miles in testing.

Dr Aravind Vijayaraghavan, Reader in nanomaterials at The University of Manchester, said the soles had been scientifically tested to be “50 per cent stronger, 50 per cent more elastic and 50 per cent harder wearing”.

Graphene, first isolated from graphite by Manchester scientists in 2004, is the world’s strongest and thinnest material - 200 times stronger than steel and only a single atom thick.

Building on the discovery, the University of Manchester now has a team of over 300 staff working on pioneering projects into graphene-enhanced products from sports cars and medical devices to aeroplanes.

Other applications of the material have included ‘printed batteries’ on textiles, special ‘sieves’ for cleaning water, high-durability paints and super-efficient LED lightbulbs.

“We are delighted to put graphene on the shelves of 250 retail stores all over the world and make it accessible to everyone”, said Dr Vijayaraghavan.

“Graphene is a versatile material with limitless potential and in coming years we expect to deliver graphene technologies in composites, coatings and sensors, many of which will further revolutionise sports products.”

Ian Bailey, chief executive of inov-8, added: “This powerhouse forged in Northern England is going to take the world of sports footwear by storm. We’re combining science and innovation together with entrepreneurial speed and agility to go up against the major sports brands – and we’re going to win.”