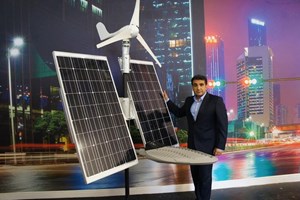 An Oldham-based firm is taking low energy lighting one step further by launching off-grid street lighting that is powered by solar and wind technology and free from day-to-day running costs.

Street lighting across the world is increasingly being switched to high efficiency LEDs, considered one of the most cost-effective measures to reduce energy consumption in towns and cities.

An international street light switching campaign launched in 2015 has calculated that replacing all existing streetlights with LEDs would slash global electricity consumption from lighting by more than 50 per cent.

Navid believes the opportunity in the UK is huge.

“In the UK alone over 4 billion kWh of electricity is consumed by street lighting every year, costing approximately £500 million and resulting in in over 1.9 million tonnes of carbon dioxide being produced”, he said.

Greater Manchester has already switched all of its 52,000 traffic lights to LEDs, saving over £1 million in energy and maintenance costs.

Bolton is also over half way through a separate project to upgrade 27,500 street lights to LEDs by 2018, which will cut its electricity consumption from lighting by half.

LED lighting technology is already several years ahead of forecasts in terms of efficiency and price reduction, and has become very much a mainstream product for both consumers and industry.

Solar Street Lighting is not the only company in Greater Manchester that is developing new low energy lighting technology.

Bolton-based Bri-Tek Technologies has recently launched an innovative universal battery for emergency LED lighting, while Manchester-based One Electrical has launched a first-of-its-kind integrated LED pendant for the domestic sector.

Greater Manchester based LED lighting manufacturers and suppliers can be found via the Business Growth Hub's Low Carbon Network.