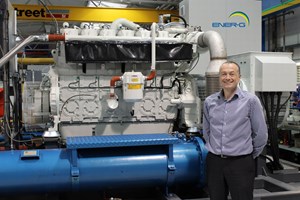 ENER-G Combined Power, a Salford-based combined heat and power (CHP) specialist, was recently recognised in The Manufacturer of the Year Awards and is part of a new £5.5m smart grid project.

The national awards are hosted by manufacturing industry publication, The Manufacturer, with the 2014 event sponsored by the Royal Bank of Scotland.

ENER-G Combined Power, part of the international ENER-G group, won the Through-life Engineering Services Award, which recognises high performance throughout the life of a product, from conceptual design and manufacture to maintenance, life extension and end-of-life treatment.

Judges were impressed by ENER-G’s progress in developing and maintaining co-generation heat and power systems that provide high value predictability and reliability over a long lifetime.

By simultaneously producing usable heat and power, CHP systems typically save users around 20 per cent of their energy costs and can cut carbon emissions by up to 30 per cent.

Heather Foster, corporate account manager at ENER-G Combined Power, said: “We’re proud to be a British manufacturer and to gain respect and recognition for our excellence.

“While 12 to 15 years is the normal lifecycle for a CHP machine, many of ENER-G’s systems last well beyond 15 years, with a number of 25-year old machines still in operation.”

A key part in ENER-G’s success is its recently launched ‘E-Power’ technology.

It provides live data from each CHP unit and alerts ENER-G's national service centre to any operational issues, as well as allowing users to directly monitor the performance of their system via touch-screens on the unit.

ENER-G is also working alongside the Combined Heat and Power Association (CHPA) and a number of other partners in a £5.5 million smart electricity grid project led by Electricity North West.

The ‘Respond’ project aims to deliver an intelligent approach to managing the power surges associated with increased electricity demand and low carbon energy generation without the need to reinforce the electricity grid with expensive new infrastructure.

As part of the project, ENER-G will be working with some of its CHP customers to pilot a ‘fault current limiting service’ which would automatically cut power exports from CHP systems to the grid when required to ensure smooth grid operation.

It is predicted that such demand response methods could provide a low cost solution to the problems associated with connecting new low carbon electricity generation to the grid, potentially saving the UK £2.3 billion by 2050.