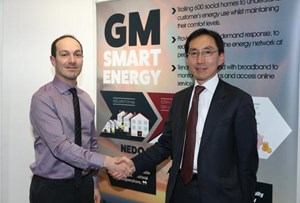 A £20 million trial of collective smart heat technology in over 500 homes in Greater Manchester was a success, reducing energy demand on the grid and saving residents money on their bills.

Electric heat pumps compress and condense outside air to generate heat, like an air conditioning unit in reverse. This results in a much lower carbon footprint than conventional gas-fired central heating.

The pumps installed in Wigan, Bury and Manchester were connected to a ‘smart community’ grid system which coordinated and controlled the combined electricity use of the households at peak times of the day, helping to reduce stress on the National Grid and save residents money on their bills in the process.

As part of the trial, which began in 2014, participants were given a tablet computer to keep them informed about their energy use, which were used to positive effect.

"The completion of this project underlines our strong relationship with Greater Manchester and we hope that we can continue working within the region on future projects”, he said.

Cllr Alex Ganotis, leader of Stockport council and environmental lead for Greater Manchester, added: "It's clear that a significant amount of energy can be saved through collective ‘demand response’ across a large number of social housing properties, and the complex nature of the project, involving multiple delivery partners, the social housing sector and new innovative techniques, has resulted in several lessons that can be passed on for future smart energy projects to learn from.”

The findings from the trial are set to be used by government for its long-term strategy on heating in the UK.