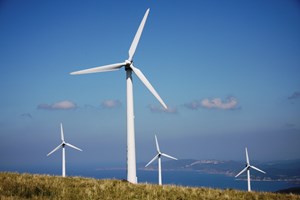 The majority of the UK’s largest firms now use renewable energy, which provided nearly a third of the country’s electricity in the second quarter of 2017 - a new record.

The latest statistics from the Department for Business, Energy and Industrial Strategy revealed the share of renewables in the UK’s electricity mix between April and June 2017 reached 29.8 per cent, a new quarterly record.

Most of this was generated by wind power, although solar also now plays a key role in the middle of the day. In April, the country went without coal power for a whole day partly because of strong solar generation - the first time this has happened since the Industrial Revolution.

Overall just 2.1 per cent of electricity was delivered by coal between April and June, with the remainder made up from gas and nuclear.

New research shows that the renewables success story is being backed by most of the UK’s biggest companies.

According to sustainability consultancy Carbon Clear, 66 of the FTSE100 now use renewable energy, with 75 per cent of the index considering climate change a key business opportunity.

“There has been a clear increase in momentum over the past year in how companies manage their environmental stewardship responsibilities”, said Mark Chadwick, chief executive of Carbon Clear.

“Mostly, this is driven by market factors, specifically in the cost of renewable energy generation and the widespread adoption of renewables as a technology of choice by communities, businesses, regions and countries.”

Leaders of the pack

Marks & Spencer was found to be the highest scoring FTSE100 firm, followed by BT in second and Unilever and B&Q owner Kingfisher in third.

The success of renewables is also forcing a noticeable shift in the energy industry. Danish energy company DONG Energy, which has invested heavily in offshore wind farms in the UK, recently revealed that it will changing its name to Ørsted in order to ditch its ‘Danish Oil & Natural Gas’ roots.