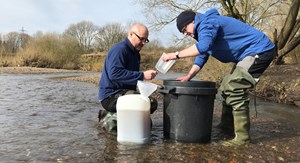 Researchers from the University of Manchester have revealed that we may be vastly underestimating the amount of microplastic pollution in rivers and seas from industrial processes and sewage.

In the first detailed riverbed study of its kind worldwide, researchers found that urban waterways in the North West are massively contaminated with microplastics - very small pieces of plastic debris including microbeads, microfibres and plastic fragments.

The particles are toxic to marine life and can end up in the food chain, causing health risks to animals and humans.

The research took place before and after major flooding during the winter of 2015/16 and the results show that much of the plastic was flushed out into the open sea.

“The implications of that are that we might well be underestimating by several orders of magnitude how much microplastic is in the oceans”, said Dr James Rothwell from the University of Manchester.

“To tackle the problem in the oceans, we have to prevent microplastics entering river channels”, said another researcher, Prof Jamie Woodward.

"We welcomed the ban on microbeads in personal care products introduced earlier this year, and we want to monitor the effect of that ban. But microbeads are also used in industrial processes in the moulding of larger plastic products. So there are likely to be multiple sources”, he told BBC News.

Microfibres from industrial effluent and from synthetic clothing escaping through wastewater are thought to be major contributors.