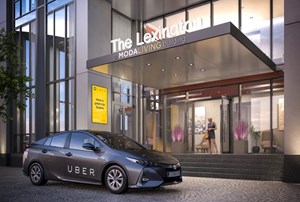 Moda Living has signed a UK-first agreement with Uber to incentivise residents at its properties to ditch car ownership, starting with a development in Manchester city centre.

The agreement will see residents offered up to £100 in Uber credits per month in return for not having a car parking space within a Moda development.

Instead of owning a car and renting a parking space, the scheme will allow residents to simply press a button and get a ride, reducing the need for city centre car ownership.

This will also allow Moda to swap the space previously used for car parking for greater amenities in each development.

The move was inspired by the discovery that cars remain parked and unused for 95 per cent of the time, taking up valuable space. In addition, less cars will help to reduce congestion and air pollution over time.

“Our apartments are for rent rather than for sale so we need to consider how our customers will live in cities in the future”, said Johnny Caddick, managing director of Moda Living.

“Embracing future technology is vital from day one and these plans for a partnership with Uber would not only give our customers an affordable ride at the touch of a button – it would also enable us to design better buildings with more space for social interaction.”

The first scheme to be rolled out will be at the Angel Gardens development in Manchester city centre, which is currently under construction and will house 900 residents when it is completed in 2019.

Gareth Lewis, UK real estate director at PwC, commented: “Moda Living’s tie-up with Uber is a great example of an innovative approach by a property business that capitalises on both advances in tech and the growing relevance of the sharing economy.

“Encouraging alternatives to car-ownership is essential to improving the liveability of cities, and partnerships like this will undoubtedly raise the level of debate around alternative uses for the significant amount of space currently dedicated to car parking.”