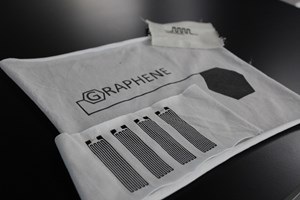 Researchers at the University of Manchester are developing flexible battery-like devices that can be printed directly onto textiles, allowing the wearer to power devices from their clothing.

The research is the university’s latest foray into the potential uses of graphene - the ‘wonder material’ discovered by Manchester scientists in 2004.

Graphene’s revolutionary 2D structure, consisting of a single layer of carbon atoms, means it is super-strong, super-conductive and ultra-flexible.

Researchers have developed a flexible ‘super capacitor' using graphene-oxide which acts similar to a battery but allows for rapid charging that can fully charge devices in seconds. It is a form of graphene that can be produced relatively cheaply in an ink-like solution and printed directly onto washable fabrics using a simple screen-printing technique.

“It will open up possibilities of making an environmental friendly and cost-effective smart e-textile that can store energy and monitor human activity and physiological condition at the same time.”

The latest development is just one in a long-line of ‘green’ applications for graphene developed in Manchester.

In 2016, Oldham-based chemicals manufacturer James Briggs announced that it was beginning to use graphene to improve the lifespan of high-performance paints. It has also previously been used to demonstrate next-generation fuel efficient vehicles and super-efficient long-lasting LED lightbulbs.

More recently, University of Manchester researchers demonstrated graphene’s potential to act as a ‘sieve’ that produces clean water from seawater.