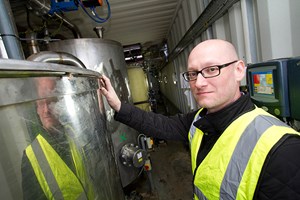 One of the UK’s biggest food manufacturers, 2 Sisters Food Group, has opened a world-first energy-from-waste plant in Carlisle as part of a new wide-ranging sustainability plan.

When fully operational the plant is expected to produce 3,500MWh of electricity a year – 20 per cent of the site’s needs – and generate a further 5,000MWh of usable steam.

Andrew Edlin, group sustainability director for 2 Sisters Food Group (pictured), said the energy plant was a “world-first for the food industry” and added that businesses must face up to the challenges posed by climate change, rising energy costs and resource depletion in order to “ensure continued success”.

“We are looking to use [energy-from-waste technology] to open up to ten further energy plants at other 2 Sisters factories over the coming three years, using potato and other food waste to generate energy and steam”, he said.

Once all the bio-refineries are in place, the company expects to save 35,000 tonnes of carbon a year and cut out 20,000 lorry journeys that would have been used to remove the potato waste from the site. The residual waste left over from the bio-refining process can also be reused as a fertiliser.

As a result, 2 Sisters will not only benefit from significant savings in energy and waste management costs, but also achieve a lower carbon footprint and take a step closer to eliminating waste going to landfill. Liverpool-based H2 Energy has partnered with 2 Sisters to roll out the project as part of a £50 million contract, which was first announced in December 2014 by Liverpool mayor, Joe Anderson.

The unveiling of the first energy plant coincided with the release of 2 Sisters’ three-year sustainability plan, Feeding Our Future, which sets out a plan to cut emissions by 20 per cent by 2018, achieve zero waste to landfill by 2017, reduce food waste by five per cent a year and reduce water use by more than eight per cent by 2018.