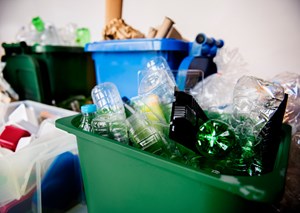 As the pressure on businesses to drop plastic continues apace, it has become “a competitive as well as a moral and ethical issue” and firms should move “very urgently”, according to a UK waste leader.

“If you have that kind of plastic in your business, you need to look very, very urgently to move out of it, or you’ll start to feel consumers giving you very direct feedback. I would be surprised if consumer pressure is resistible for much longer at all.

“Taking action on this is now a competitive issue as well as a moral and ethical issue. The early 2030s are probably just about acceptable in the public domain for a complete phase-out, but businesses should be looking at how they make some of their moves sooner.”

The UK government has pledged to achieve zero avoidable plastic waste by the end of 2042, while the EU has set a goal to make all plastic packaging recyclable by 2030.

Many leading organisations have already made commitments to phase out the worst plastics much sooner than this. The BBC is one of the latest to join the exodus with a pledge to ban single-use plastics by 2020.

Meanwhile, in Parliament a number of MPs have signed a motion calling on the government to put a tax on plastic to discourage over-use and cover the cost of recycling - the majority of which is currently paid for by taxpayers.