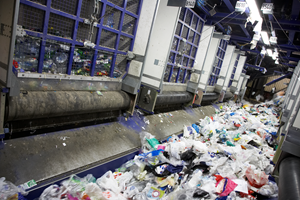 It is now compulsory for large retailers in England to charge a minimum of 5p for single-use plastic carrier bags, but industry groups fear the policy is a missed opportunity for small businesses.

The 5p charge, introduced in England from Monday 5 October 2015, brings the country in line with Wales, Scotland and Northern Ireland, which had already established their own charges between 2011 and 2014.

The levy, first announced in 2013, will help to tackle the environmental impacts of non-biodegradable plastic bags, with around eight billion thrown away in the UK every year.

Having introduced a levy in 2011, Wales has seen bag use drop by 71 per cent in four years.

The UK-wide levy is expected to save £73 million in waste carbon cost savings over the next decade whilst raising some £730 million for good causes. It is also hoped that it will help England towards its EU recycling rate target of 52 per cent, which it is currently lagging behind.

Environment minister, Rory Stewart, said: “Wales, Scotland and Northern Ireland have seen a dramatic fall in the number of plastic bags taken from supermarkets and we can expect a significant reduction in England, possibly by as much as 80 per cent in supermarkets and 50 per cent on the high street.”

However, in England the charge is only compulsory for large businesses with more than 250 employees and industry groups have warned that this will confuse consumers and leave small businesses behind.

Alice Ellison, environmental policy advisor at the British Retail Consortium (BRC), warned that the decision would send “complex messages” to consumers about where the charge applies, while Chris Noice, spokesperson for the Association of Convenience Stores (ACS), described it as a missed opportunity for small businesses to raise money for charity and “do more local engagement”.

A survey of 1,000 consumers by money saving experts, Make It Cheaper, found that the majority of people would not be deterred from using a small business if they introduced a charge for plastic bags.

Nick Heath, business savings expert at Make It Cheaper, said: “It’s a great idea for small business owners to become early adopters of the plastic bag charge. Not only did the survey show that the majority of consumers are actually in favour of the charge, but it’s also a great way to distinguish your business from your competitors.

“The Government has also announced that businesses joining in the first year can cover overheads in order to become compliant with the law. So it’s better for small businesses to act early and reap the benefits, because we will see the number of these reasonable costs reduce after the first year.”

The Government has stated that it encourages small businesses to join the scheme on a voluntary basis.

Posted under General Interest on 6 October 2015