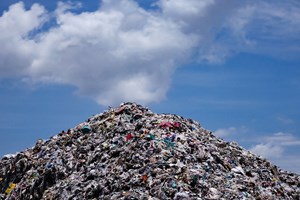 Stockport recycling specialist Axion believes the hype over single-use plastics is overshadowing a much bigger issue - the 450,000 tonnes of UK plastic waste being exported to Asia every year.

Prime Minister Theresa May has announced plans to launch a consultation later this year to ban a range of single-use plastics, which could spell an end to plastic straws, stirrers and cotton buds.

However, compared to the amount of packaging waste being exported to developing countries in Asia, where most marine plastic pollution originates, the issue of single-use plastics is “tiny”, according to Axion.

The UK is dependent on exporting plastic waste to other countries because it is currently unable to process all of the waste it produces.

The biggest destination was traditionally China until it started banning plastic waste imports in 2017. There has since been a huge jump in exports to other developing countries such as Malaysia, Vietnam, Cambodia and Sri Lanka.

“82 per cent of ocean plastic originates in Asia Pacific countries. If we were worried about standards of residual waste disposal in China, then we should be even more concerned about waste treatment infrastructure in these less-developed countries”, said Keith Freegard, director at Axion.

Experts sharing this view include Jessica Baker, director at fellow recycling firm, Chase Plastics, said: "Banning straws and other single-use plastic when the oceans are filling with our exported plastic is like fiddling while Rome burns. It will do very little to change the problem of plastics in our oceans.”

Experts are instead urging the government and businesses to make products more recyclable and support the reprocessing of plastic waste at home in the UK.

“It’s no longer good enough to export it overseas, and hope for the best, we’ve got to be seen to be recycling as much as we can through well-regulated businesses”, Keith Freegard added.

To support change, Axion has launched a ‘Design for Recycling’ service to help companies redesign plastic packaging that is optimised for end-of-life.