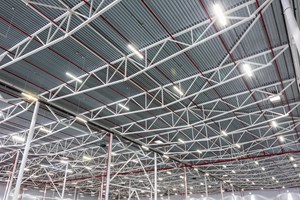 Tech giant Philips has joined forces with environmental groups to call for all buildings to switch to LED lighting by 2030 as the ‘fastest and most cost-effective’ measure to tackle climate change.

Alongside NGOs The Climate Group and the World Green Building Council, Philips Lighting has called for all new buildings to have energy efficient LED lighting by 2020 and all existing buildings to switch to the technology by 2030.

The company also reiterated an earlier call for a ‘Big Switch’ of street lighting to LEDs by 2025.

With buildings currently accounting for approximately 40 per cent of global energy use, retrofitting existing building stock with energy efficient technologies is vital to international efforts to tackle climate change.

Damian Ryan, acting chief executive of The Climate Group, described LED lighting as “the fastest and most cost-effective change we could make tomorrow [to tackle climate change].

“As we move forward to a new climate-resilient future, one of the most immediate opportunities we can seize upon is driving energy efficiency through renovation and lighting. Buildings and infrastructure use a significant amount of global energy, so bold targets are needed”, he said.

Philips Lighting used the opportunity to launch its Brighter Lives, Better World programme for 2020, which includes a target to derive 80 per cent of its revenues from products, systems and services which provide environmental or social benefits.

The initiative will also see the firm become carbon-neutral and be completely powered by renewable electricity by 2020.

“For us, sustainability is a double win: a driver for economic growth and a means of advancing the planet”, said Eric Rondolat, chief executive of Philips Lighting.

Meanwhile, new data from the UK suggests that companies may be becoming more hesitant to invest in energy efficiency due to the economic uncertainty surrounding the UK’s exit from the EU.

According to the latest Energy Efficiency Trends Report, compiled by energy analysts EEVS and Bloomberg New Energy Finance, investment in high efficiency lighting was significantly lower in the second quarter of 2016 than its rolling four quarter average.

A quarter of respondents to the survey reported that the EU referendum result would have a minor or major impact on their energy saving investment plans, despite more than half expecting energy prices to increase following Brexit.

Richard Singleton, managing director of corporate at facilities management firm, Bellrock, which supports the report, said that Brexit had “without doubt” created uncertainty for businesses, but added that businesses should still be exploring investments in energy saving measures.

“The universal response is to be cautious and focus on business as usual. [But] reducing energy bills and creating more certainty for operating costs is a positive response.”