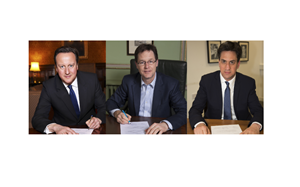 David Cameron, Ed Miliband and Nick Clegg have signed a cross-party commitment to increase efforts to tackle climate change, regardless of the General Election result in May.

The agreement, brokered by Green Alliance and a number of other NGOs, commits the UK’s three major parties to:

The joint statement of intent from all three party leaders was well received by industry, with Unilever chief executive, Paul Polman, arguing that its importance “cannot be overstated”.

“A consistent UK policy framework was a crucial factor in Siemen’s decision [in April 2014] to make a multi-million pound investment in wind turbine production and installation facilities in Hull”, he said.

“This demonstration of cross-party support sends a clear message that the UK remains a good place for global companies to do low carbon business.”

The pledge to phase out coal is being seen is particularly notable for the green energy industry, given that no political party had explicitly committed to do so until now.

Former Liberal Democrat leader, Lord Ashdown, said that businesses and investors should treat the agreement as “reassurance that the UK will remain on its current path to decarbonise its economy irrespective of who wins the election.”

The cross-party agreement comes shortly after the close of 2015’s first international climate summit, in Geneva, in the lead up to December’s UN climate negotiations in Paris.

On the prospects for a global climate deal in Paris, energy and climate secretary, Ed Davey, said there would be no “backsliding” from any party after May’s election.

“I am ever more confident that we will emerge from Paris with a comprehensive agreement that all [countries] will sign”, he said.

Posted under General Interest on 17 February 2015