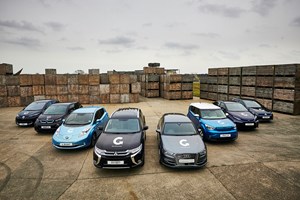 The UK’s electric vehicle market grew by 19 per cent in 2018, with almost 60,000 new plug-in electric cars registered, according to the government-backed Go Ultra Low campaign.

The end-of-year figures mark the seventh consecutive year of growth for the electric vehicle market and the most successful to date, with the number of pure electric and plug-in hybrid cars registered to date in the UK now standing at almost 200,000.

Plug-in hybrid models held the bulk of the market, accounting for nearly three quarters of registrations. However, pure electric cars also saw a significant boost in 2018, up 14 per cent on the previous year.

In a statement, Go Ultra Low, which provides a one-stop shop for information about owning and running electric vehicles, said the increasing number of models available for consumers and businesses was helping to drive up demand.

According to a poll of 2,000 people commissioned by Go Ultra Low, nearly a fifth of Brits would like to make the switch to an electric vehicle in the near-future.

Poppy Welch, head of Go Ultra Low, said: “In the context of the wider new car market, it is fantastic to see plug-in car registrations continue to go from strength-to-strength.

“Looking at the year ahead, 2019 is set to be a pivotal one for the electric car market. With even more new models being released [in 2019]… we’re confident that the next 12 months will be a landmark year for the nation’s switch to electric.”

The government has put in place a ‘Road to Zero’ strategy to ensure at least half of all new cars will be low emission by 2030 through a “massive expansion of green infrastructure”.

As part of the strategy, grants for plug-in cars and vans have been extended into the 2020s, with a tighter focus on supporting just pure electric vehicles rather than hybrids.

Posted under Environmental Technologies and Renewable Energy on 23 January 2019