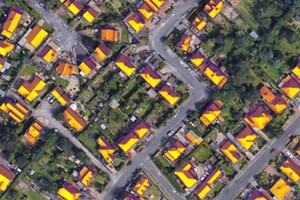 UK users can now use Google Maps to estimate the savings they could make with solar panels on their rooftop, thanks to a collaboration between Google and energy giant E.ON.

The tool calculates how much sunlight falls on each roof during the year, taking into account the pitch and size of the roof, weather data, the position of the sun in different seasons and the shade of surrounding buildings or trees.

Users simply enter their address or drag the red marker on Google Maps to their rooftop.

The platform was originally launched in Germany in 2017 and has now been rolled out to users in the UK, with Italy next in line for the service.

E.ON and Google are not the first major partnership to launch an online solar calculator – IKEA has previously launched a similar service in collaboration with solar provider Solarcentury.

Businesses and homeowners interested in installing solar panels have a shrinking window in which they can access subsidy support.

Under current government plans the popular Feed-in Tariff (FIT) scheme, which provides a 20-year subsidy for small solar arrays, is due to expire next year.

Posted under Environmental Technologies and Renewable Energy on 13 June 2018