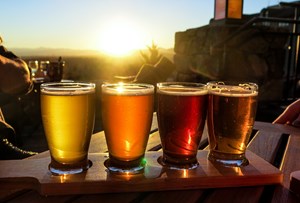 Rising temperatures this century are likely to negatively affect the global supply of barley, the main ingredient of beer - possibly doubling the cost of the world’s most popular tipple.

Average yields could be impacted by up to 17 per cent in the worst case scenario, meaning a shortage of barley for beer production.

According to the research, beer-loving countries would see a huge increase in costs as a result, including an estimated 193 per cent price hike in Ireland - the world’s biggest consumer per capita. The UK is also inside the top ten countries facing the biggest price increases.

Other countries with less of a cultural connection to beer will likely see huge decreases in consumption due to rising prices and barley exports shifting towards the more beer-hungry nations. Argentina, for example, could see beer-drinking shrink by a third.

“Although the effects on beer may seem inconsequential in comparison to many of the other - some life-threatening - impacts of climate change, there is nonetheless something fundamental in the cross-cultural appreciation of beer”, the report reads.

“For perhaps many millennia, and still at present for many people, beer has been an important component of social gatherings and human celebration. Although it may be argued that consuming less beer is not disastrous - and may even have health benefits - there is little doubt that for millions of people around the world, the climate impacts on beer consumption will add insult to injury.”

Posted under General Interest on 14 November 2018