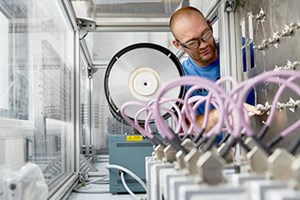 Four organisations from Greater Manchester and Lancashire have been named finalists in the prestigious BusinessGreen Technology Awards 2018.

The BusinessGreen Technology Awards, now in their fourth year, aim to celebrate the cutting-edge technologies and innovators that are working to accelerate the transition to a sustainable, low carbon economy.

The Furniture Recycling Group in Blackburn is one of two North West organisations shortlisted for R&D Programme of the Year. The company recently revealed that it had boosted its revenue by 20 per cent thanks to innovative systems that have greatly increased the number of mattresses it can recycle per week.

The firm is now working on an automated mattress stripping machine that it hopes will increase its weekly mattress recycling rate from 6,500 to 20,000 within the next three years.

The £4.1 million facility opened in October and will produce advanced materials to further the development of fuel cells and next-generation energy storage. Academic expertise and specialist equipment will be shared with businesses across Greater Manchester so they can be trained in the new technology.

Highview Power, a cutting-edge liquid air energy storage project in Bury that uses excess electricity to store energy in the form of liquid air, is a finalist in the Smart Grid Technology of the Year category.

Last year, the project was awarded £1.5 million to expand its operations with the ultimate goal of being able to respond to demands for power from the National Grid within one second.

Lastly, Omar Rahim, chief executive of Bolton-based Energi Mine, which has developed a Bitcoin-like currency to reward energy saving behaviour, is a finalist for Innovator of the Year.

Early this year Energi Mine raised £12 million in its initial pre-sale of its Energi Token cryptocurrency, which can be rewarded to consumers or employees in return for energy saving behaviour. The platform is currently being trialled by Network Rail.

Posted under Waste and Recycling on 14 November 2018