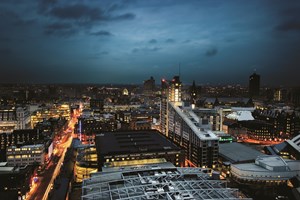 An award-winning support service based in Greater Manchester has helped businesses to save one million tonnes of carbon dioxide by reducing their use of energy, water and materials.

The milestone has been achieved by the internationally-recognised ENWORKS service, part of Greater Manchester’s Business Growth Hub.

To put the achievement into context, one million tonnes of CO2e (carbon dioxide equivalent) represents:

Click here to view two short films about the achievement

The carbon saving has been achieved by reducing costs – a double win that has saved companies over £270 million.

Improved environmental practice has also helped these companies secure £371 million of sales contracts and create or safeguard nearly 8,300 jobs – proving that greening the economy does not have to come at the expense of growth.

The ENWORKS service launched in 2001 as an independent partnership of business leaders, influencers and policy-makers. To date it has supported over 13,000 North West businesses in making the transition towards a more sustainable, low carbon economy.

Its combination of practical advice, awareness-raising and tailored on-site support to help businesses to convert environmental pressures into competitive advantages has won a host of national and international accolades, attracting praise from the likes of former US vice-president Al Gore and renowned environmentalist Sir Jonathon Porritt.

“We’re delighted to have achieved this milestone. When we set out on this journey several years ago, we recognised that the way businesses were being supported would need a significant shake up if we were to make a meaningful contribution to both economic growth and environmental protection”, said Samantha Nicholson, Head of Manufacturing and Low Carbon at the Business Growth Hub.

'Tip of the iceberg'

“Saving one million tonnes of CO2e is a huge achievement that shows that our model of tailored, one-to-one support works; we have become a trusted partner to thousands of companies who are collectively leading the way to a prosperous low carbon economy.

“But we can’t stop now”, she added. “Our recent research for the Department of Energy and Climate Change suggests that UK SMEs could be missing out on annual savings of up to £2.6 billion on energy efficiency alone, which could save up to 17 million tonnes of CO2e per year. We’re still only at the tip of the iceberg in terms of our potential.”

The support is delivered through the Business Growth Hub’s Green Growth service, which combines resource efficiency expertise with a programme of support for businesses in the low carbon and environmental goods and services sector, such as waste recycling, LED lighting and renewable energy.

The expert service, specifically tailored for SMEs, is a key part of Greater Manchester’s plan to be a leading low carbon economy by 2020.

Cllr Sue Derbyshire, Chair of the Greater Manchester Low Carbon Hub, said: “Greater Manchester’s aim for 2020 is to cut carbon emissions by 48 per cent against 1990 levels and set us on the path to becoming the greenest economy in the UK.

“The fact that the Business Growth Hub has helped businesses to save one million tonnes of CO2e demonstrates the vital role that local businesses can play in helping to make this vision a reality.”

“The support we’re delivering to businesses is internationally-recognised as best practice in its field – it’s a great example of how Greater Manchester is leading the way in engaging the business community to tackle climate change while supporting local growth in the process”, he said.

Mike Blackburn, chair of the Greater Manchester Local Enterprise Partnership, added: “One of the great things about the Business Growth Hub’s achievement is that it clearly demonstrates that greening the economy is good for business.

“One million tonnes of CO2e has been saved by reducing the use of energy, materials and water – saving £270 million in costs in the process. This is a win-win agenda.”