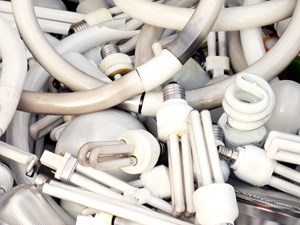 Researchers have developed an innovative process that makes it easier and more sustainable to extract and recycle rare earth metals in spent fluorescent and energy saving lamps.

These metals have been used in energy efficient lamps and colour television screens for over 40 years but are not typically recycled.

Rare earth metals are often vital ingredients for green technologies, such as energy efficient lighting, solar PV and electric vehicles, meaning that demand for them is set to grow rapidly as these technologies become more mainstream.

For example, demand for lithium, a rare earth metal widely used in batteries for low carbon vehicles and electricity storage technology, is expected to rocket by nearly 600 per cent between 2012 and 2030.

Furthermore, rare earth metals are often hazardous to extract and difficult to refine – resulting in substantial environmental impacts – and most operational mines are confined to just a handful of countries. This lack of geographical diversity leaves the supply of rare earth metals at risk from geopolitical tensions and volatile prices.

As a result, there is an increasing interest in developing new methods to recycle rare earth metals from waste streams to reduce their environmental impact and mitigate risks to supply.

Europium and yttrium are important elements in energy efficient lighting: both are needed for red lamp phosphor, a material that helps to convert ultraviolet light produced by fluorescent and energy saving lamps into the visible light we can see.

Until now, these metals have only been extractable from spent lighting through the use of acid solutions, which are both energy intensive and damaging to the environment. As a result, although it is a requirement to recover mercury from end-of-life fluorescent tubes, europium and yttrium are not being recovered.

However, an ‘ionic liquid’ developed by the researchers is able to dissolve red lamp phosphor efficiently without harming the environment, allowing 80 per cent of the europium and yttrium to be recycled and reused in new lamps.

Dr. David Dupont, researcher at the University of Leuven, said: “Instead of employing an acid as the solvent, we use an ionic liquid. It does not evaporate, it is inflammable and works very selectively.

“We can design it in such a way that it only dissolves the red lamp phosphor. The recycled europium and yttrium can [then] be directly reused. Furthermore, the ionic liquid is also reusable for a next cycle.”

The advancement not only creates a new opportunity for recycling companies, but it is hoped it will also make the low carbon lighting industry more sustainable by reducing its demand for virgin rare earth metals.