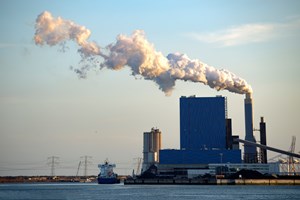 The government has unveiled new measures to tackle non-transport sources of air pollution just days after the European Commission announced that it intends to take the UK to court over air quality.

The European Commission announced on 17 May that it had referred the UK - along with France, Germany, Hungary, Italy and Romania - to the European Court of Justice for failing to take appropriate measures to reduce air pollution as quickly as possible.

The government has since launched its long-awaited Clean Air Strategy, a sister document to the roadside pollution plan it introduced in 2017 to reduce traffic pollution in towns and cities.

While councils are already busy drawing up measures to reduce transport pollution in their vicinities, the Clean Air Strategy addresses other sources of air pollution such as maritime and aviation, domestic wood burners, agricultural machinery and construction equipment.

The strategy, which is open for consultation until 14 August, will introduce legislation which could take the form of a new Clean Air Act.

The legislation will give local authorities new powers to improve air quality, for example by allowing them to impose minimum emissions standards for equipment on construction sites.

Legislation will also tackle the most polluting forms of coal and wood burning in homes, which is now the UK’s single largest contributor to particulate matter (PM) pollution.

Unveiling the strategy on 22 May, environment secretary Michael Gove said: “Government cannot act alone in tackling air pollution. Our strategy sets out how we will work with businesses, farmers, industry and households to develop innovative new solutions to reduce emissions.”

However, many experts still believe more effort is needed to reduce transport pollution.

Gudrun Cartwright, environment director at Business in the Community, said: “Transport is the largest contributor to air pollution and we must not lose sight of this.

“Business [has] a huge role to play. Air pollution is the fourth biggest threat to public health [after cancer, obesity and heart disease] and businesses need to assess both their contribution and solution to the problem.”