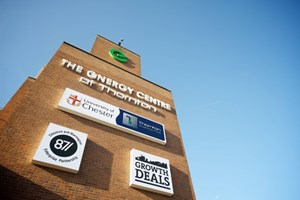 A multi-million pound energy facility opened in Ellesmere Port in August will be a national centre for companies developing, testing and demonstrating energy technologies of the future.

The facility covers 90,000 square metres of industrial laboratories, workshops and office space for companies and is primarily aimed at supporting new power saving and energy technologies.

Examples of technologies that may be tested and developed include:

Professor Tim Wheeler, vice chancellor of the University of Chester, said: “The University is extremely proud of The Energy Centre. The state-of-the-art building is offering companies unrivalled possibilities to allow ‘lightbulb’ moments to happen, as researchers ‘plug and play’ with a number of facilities, across all aspects of energy systems and smart grids.”

The University of Chester believes the centre will become a “nationally significant facility” in aiding the development of low cost, environmentally responsible sources of energy.

It will also be home to the UK’s first ‘intelligent campus micro-grid control system’ that enables the integration of multiple energy sources, including a combined heat and power (CHP) plant, solar PV, an energy storage facility and load bank.

Low carbon energy is a key pillar of the Northern Powerhouse agenda, with northern England accounting for 45 per cent of the UK’s share of renewable energy research funding - more than any other UK region.