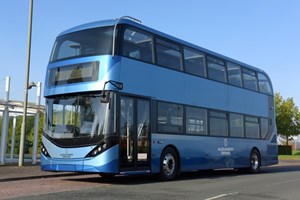 Stagecoach has announced a plan to introduce more than 100 zero emission electric buses in Greater Manchester by 2020 - far outstripping plans in London and elsewhere in Europe.

The £56 million proposal for a 105-vehicle fleet of electric buses, backed by Greater Manchester mayor Andy Burnham, would be the largest single investment of its kind in Europe and far larger than London mayor Sadiq Khan’s current plan for 68 e-buses in the capital.

It is hoped that the move will deliver a massive boost to local air quality in Greater Manchester, as well as support UK manufacturing.

The Enviro400 EV City buses, which can carry around 80 passengers, would be built by the UK’s leading electric bus manufacturer, Alexander Dennis.

Major charging infrastructure would also be installed at Stagecoach depots to enable the buses to operate 24 hours a day.

Overall, the initiative would save Stagecoach 2.6 million litres of diesel a year, thousands of tonnes of CO2 and reduce emissions of dangerous nitrogen oxides (NOx) and particulates across its Greater Manchester fleet by nearly a quarter.

Martin Griffiths, chief executive of Stagecoach Group, described the proposal as a “game-changing”.

“Our plans will put Greater Manchester at the forefront of the drive to improve local air quality, and help cement Britain's position as global leader in manufacturing low emission vehicles”, he said.

As well as investing in low emission buses, Stagecoach also encourages its drivers to use eco-driving techniques through software from telematics firm, GreenRoad. Special dashboards on its buses give drivers instant feedback on their manoeuvres to encourage fuel-efficient driving.

Graham Judge, a Stagecoach driver in Merseyside, was recently named the company’s ‘eco-driving champion’ for 2018, while more than 2,500 drivers have achieved the ‘Gold Badge’ for consistently maintaining elite driving standards.