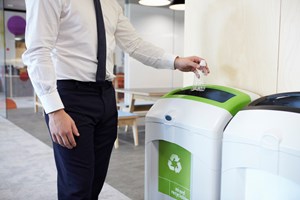 A poll of 900 SMEs in the UK and Ireland shows that most are keen to improve their environmental impact, with around 8 in 10 separating waste for recycling and encouraging staff to be greener.

The survey, conducted by Close Brothers Asset Finance, asked owners of small and medium sized companies across a range of industries how they felt about a range of issues affecting their business.

Meanwhile, 81 per cent said they already separated their waste for recycling. Companies in the engineering sector were found to be the best recyclers, with an average recycling rate of 92 per cent.

Neil Davies, chief executive of Close Brothers Asset Finance, said: “There are well known issues with recycling in the UK, including China's decision to ban foreign waste imports. But that, along with the public’s increased awareness of the impact of plastic, appears to be accelerating positive changes to the UK’s recycling system, which will make the efforts businesses are making worthwhile.”

One action business owners were less supportive of was home working, with only 45 per cent willing to promote working from home as a way to reduce their carbon footprint and environmental impact.

Furthermore, the majority (76 per cent) said that cost of goods was still more important than their environmental impact overall.

‘The will is there’

“These results clearly demonstrate the decisions business owners are faced with every day,” Neil Davies explained. “On the one hand they really want to be ethical in the purchasing choices they make, but on the other they need to protect their profits.

“What is encouraging is that the will is obviously there. As less environmentally damaging products become available and, importantly, affordable, they will be considered by those making the purchasing decisions.”

Posted under General Interest on 23 January 2019